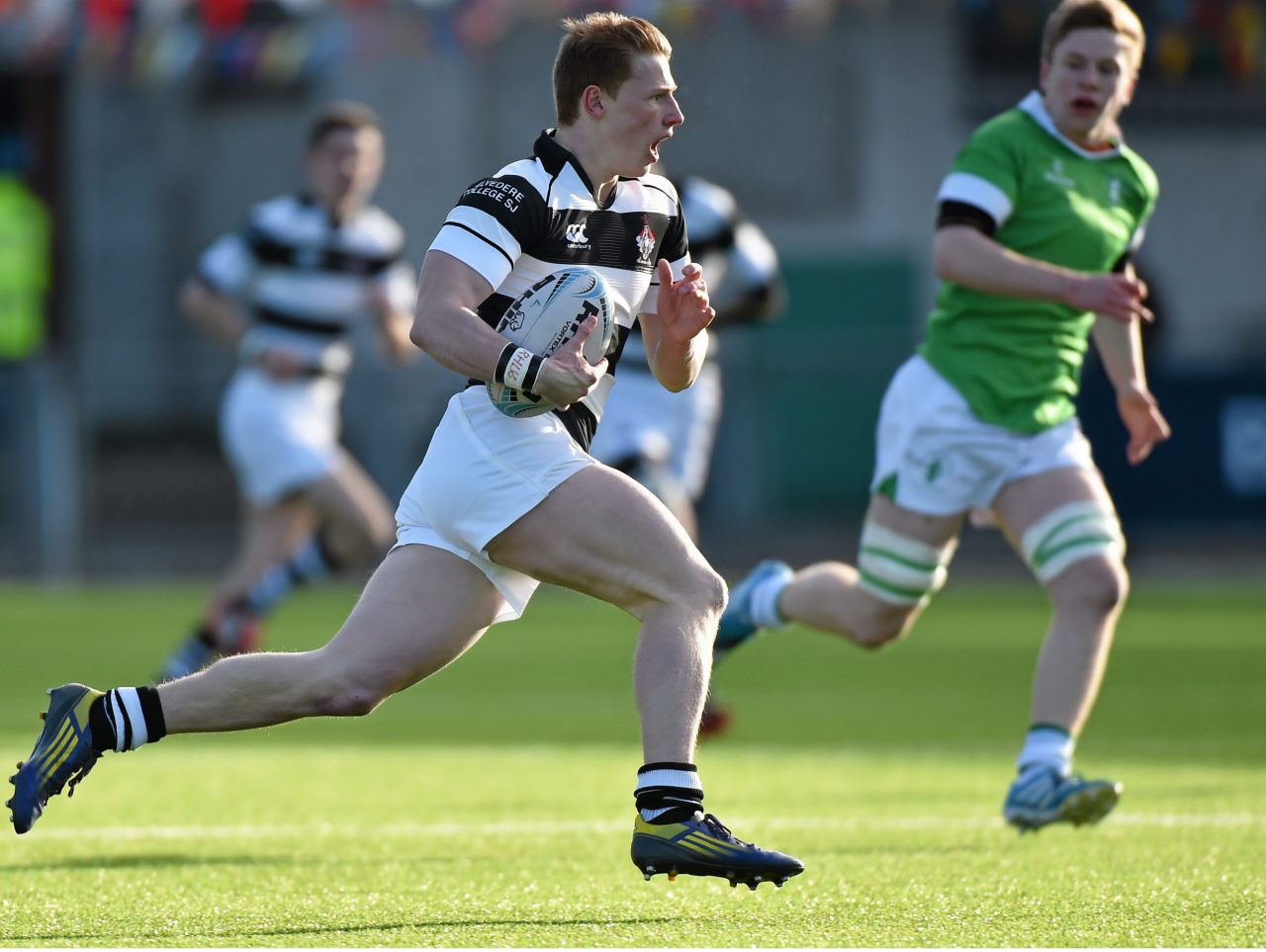 Belvedere made a serious statement of their intentions with a five-try win over Gonzaga in the Bank of Ireland Leinster Schools Senior Cup first round at Donnybrook on Wednesday.

The adrenalin coursed strongly enough through Belvo’s Conor Jennings that the fly-half overheated the kick-off straight into touch.

Still, they came straight through the centre with ‘Zaga openside David Meenan there to meet the challenge and when Jennings moved it wider Jayesh Daly-Devereux took Oscair McGrath to the floor.

The first real incision came from the northsiders’ centre James McKeown on a mazy counter that came to nothing when the support did not arrive in time.

Gonzaga couldn’t keep filling the gaps. They needed go-forward. The problem was their opponents looked most dangerous moving the ball from deep.

Their decision to move the ball from inside their 22 was undone by poor handling with Belvo blindside Jesse Iredale’s muscularity forcing a knock-on. This was rebuffed by a stubborn scavenging defence, led by Meenan, and captain Ross McKeever’s hit on lock Conor McCaffrey.

The barreling bursts of number eight Tom de Jongh and flanker Max Kearney opened the space for wing McGrath and McKeown to go close to the breakthrough.

Something had to give. Belvedere refused to take three points. They eventually reaped the reward from De Jongh’s launch for the line and Jennings conversion in the 24th minute.

They were back for more when centre Sean Long and McGrath tuned in to put McKeown away on another out-to-in-to-out surge that ended in the second try. Jennings’ conversion made it 14-0 in the 27th minute.

De Jongh went careering away from receiving the kick-off to earn good position. However, a loose ball was seized on and hacked ahead to force an attacking lineout. Gonzaga had what they badly needed. But, the ball was overthrown and the pressure released.

Gonzaga full-back Barry Goulding broke away on the right and they were really motoring when Belvo scrum-half Hugh O’Sullivan picked off a ball intended for centre Conor Gowing to show the pace required to finish from distance for 19-0 in the 33rd minute. 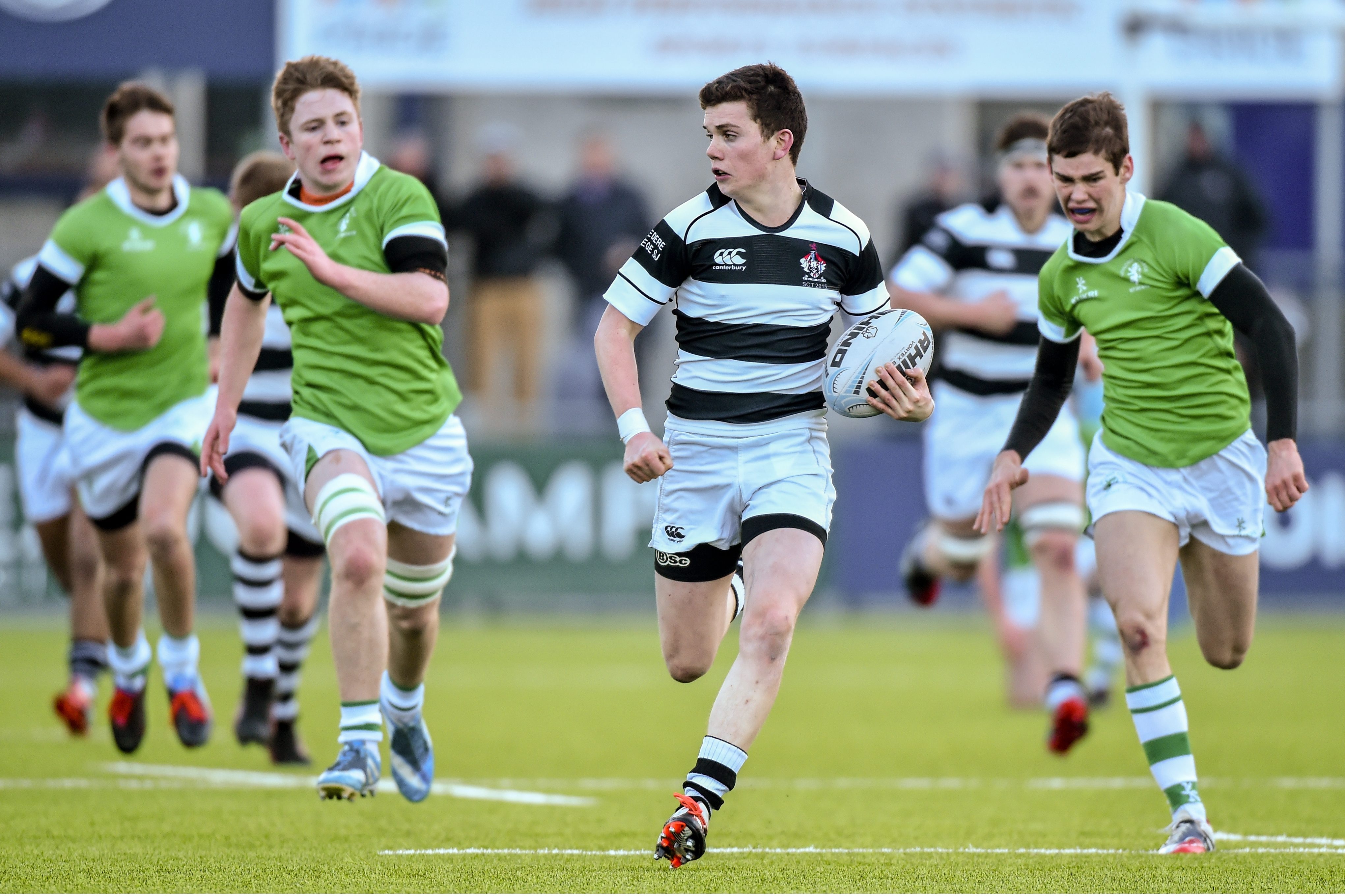 Gonzaga had to show something they hadn’t revealed in the first-half if they were to make Belvedere think twice.

They had the right idea by swiftly switching the ball. They just fell short on execution and Belvedere fed on the mistakes for De Jongh to put Long in at the left corner.

But, Gonzaga stayed true to the way they play. They didn’t go into a shell. They looked for space and centre Gowing found it with impressive speed and footwork.

They had territory for the first time, but came up against a sturdy defence clearly intent on preventing any colour of consolation until Gowing moved graceful into overdrive again.

They had the composure to go back the other way when that didn’t work for full-back Goulding to drive to the line for the try of the game.

Belvedere quickly struck back with a penalty by Jennings and O’Sullivan, now operating from full-back, finished it off in injury-time.