Ben Te’o and Scones at the Laighin Out 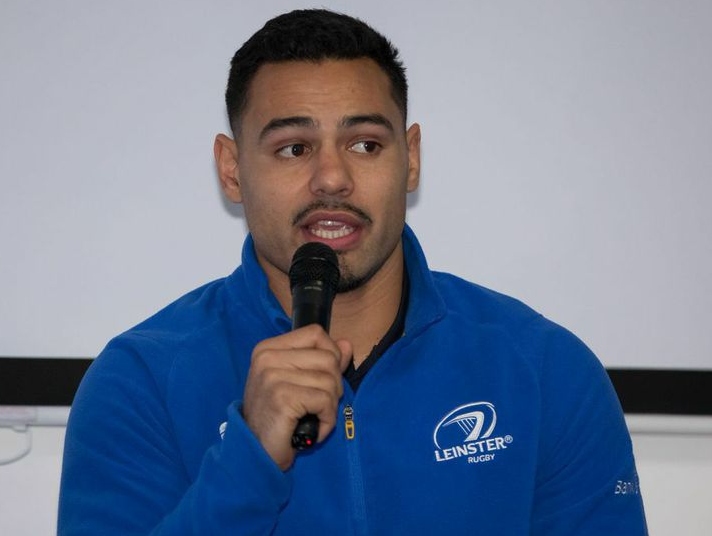 Following the Leinster victory over Ospreys in the Guinness Pro 12, supporters at the Laighin Out Bar had their first opportunity to meet Leinster new boy, Ben Te’o.  It was planned to have Kane Douglas join Ben on the night, unfortunately Kane could not make it due to an injury sustained in the match.

Our host for the evening, former OLSC president Aisling O’Connor firstly enquired as to how his recovery from injury was progressing. Ben replied that he is hoping to have the brace removed from his arm next week, then be able to return to training over a number of phases.  Ben’s new passion since reaching our shores is eating scones it would seem. He informed us that he had never seen or eaten scones before coming to Ireland.  When asked about his initial impressions of Leinster and Dublin, the Auckland native stated that he is very happy with most aspects of being here, living with the Kearney brothers, eating scones, and working at getting up to speed with the challenges of being a Leinster player. He also spoke highly of the Leinster Academy and the standard of players coming from it.  One negative experience he has had so far was getting his car clamped, he was definitely less than impressed with that.

When quizzed about a very favourable caption on a picture of him on Rob Kearneys Instagram feed, it was revealed that he had convinced Rob to let him write the caption.

When asked about what he likes to do in his spare time, Ben told us that going to the movies was high on his agenda, along with hanging out with Noel Reid and Brendan Macken and “going to the mall”.  Ben’s Christmas plans include a swim in the “40 foot”, and hanging out, but his main focus is to be working toward playing rugby either at, or soon after Christmas.

Aisling invited Ben to reveal three hitherto unknown facts about himself.  Ben told us that he is something of a history buff and enjoys visiting museums, he is not a very strong swimmer and, unusually for an Antipodean, he had no tattoos.

We would like to thank Ben for taking time out to visit the supporters at the Laighin Out Bar and wish him a speedy recovery from his injury.  Hopefully we will see him don the blue jersey again soon.

See photos from the Q&A here