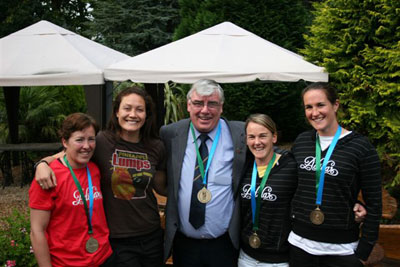 Boyne had the great pleasure to host four of the Women’s Rugby World Cup winning team, the Black Ferns, in Boyne RFC two days after they won the Cup in The Stoop…

This resulted from a promise made by one of their players called Vita Robinson who happened to play with Boyne in 2009, to come to Boyne RFC immediately following the final.

She is also the partner of former Boyne player Hadley Dryden who was a member of Boyne’s first Newstalk Provincial Towns Cup winning side in 2009, who also accompanied the entourage with his parents, John and Fran.

A fantastic night was had by all in Shamrock Lodge as the Boyne members, led by the wonderful singing of members Seamie Briscoe, Noel Martyn, Noel Coogan and Kevin Woods, joined in the celebrations with the Kiwi girls.

The girls showed that they could not alone play rugby but they could also deliver some lovely songs of their homeland. The large New Zealand contingent thanked their hosts for a wonderful evening’s entertainment and hospitality.