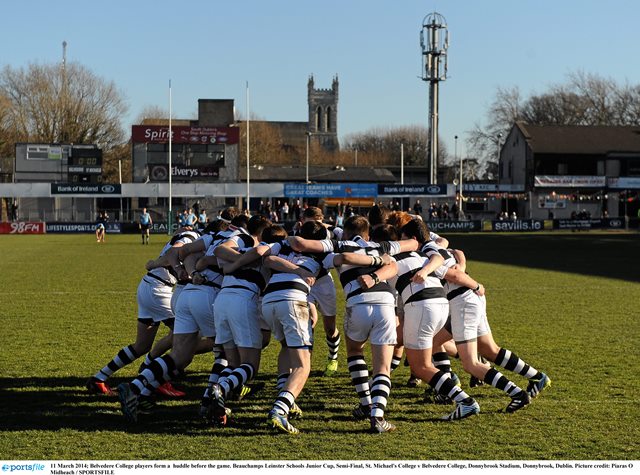 The final of the Beauchamps Leinster Schools Junior Cup between Blackrock and Belvedere will take place in Tallaght Stadium on Sunday, March 23rd with a 3.00pm kick off…

With 12 matches played in Donnybrook between the 1st-23rd of March alone and over 80 matches played throughout the season, Leinster Rugby is delighted to be holding the Beauchamps Junior Schools Cup Final in Tallaght Stadium for the first time in the competitions history. The Leinster Senior squad famously played Gloucester Rugby in 2012 during a pre-season friendly on the 11th of August and couldn’t speak highly enough of the wonderful facilities. The well-manicured surface in Tallaght will hopefully produce an exciting game between two talented teams.

The first round of the cup was badly disrupted by wind and rain. The Kilkenny v Terenure tie was the only game to survive the weather on February 6th. A 70 metre run by prop Zac Vaughan gave Terenure a narrow 8- 5 victory.

In Templeville the free scoring Newbridge back line out manoeuvred Castleknock.  C.U.S., with two Rob Mackey penalties, dug deep to grind out a 6 – 0 win over Cistercian Roscrea, while an injury time try gave Belvedere a 15 -12 win over an unlucky Gonzaga. Two early second half tries broke the resistance of St Marys at Lakelands. St Michaels centre Chris Carey showed great pace to run from his own 22 to score.

At Merrion Road Clongowes Wood scored late to defeat a determined Presentation Bray. After a scoreless first game St. Gerards, through Mark Baker, dropped a goal late in the replay to defeat St Andrews. The score line in Donnybrook did not reflect the gallant effort from CBC Monkstown, inspired by their number 8, Eoghan Clarke. However, Blackrock with a strong second half display were worthy winners.

In the first quarter final the Newbridge v Terenure game was close and exciting to the final whistle. An opportunist try by Cian Murphy of Newbridge seemed to be the winning score until Adam La Grue scored in injury time to secure Terenure’s passage to the semi finals. St. Gerards proved tough opposition against a fancied St. Michaels and led 7 – 5 with twenty minutes remaining. Constant pressure from St Michaels eventually broke the St. Gerards resistance and they won 27 – 7. A hat trick of tries from captain ,Andrew Murphy, was the highlight in Blackrock’s win over a gallant C.U.S. Belvedere were always in control against Clongowes Wood and were 29 – 3 winners.

In the first semi-final, Terenure had no answer to a well coached Blackrock side. Early tries from Andrew Savage and Stephen McLaughlin contributed to a 22-3 interval lead. Terenure asked questions of the Blackrock defence in the second half but failed to cross the Blackrock line. The second semi final was a much closer match. St Michaels camped in the Belvedere 22 early on but a well organised defence kept them scoreless. Late in the first half a series of sustained Belvedere drives resulted in full back, Rory Clarke, breaking through the St Michaels defence to score. After the interval St .Michaels had again the bulk of the possession but two backline tries from Rory Clarke and David Hawkshaw gave Belvedere a comfortable lead. St Michael’s elusive centre Chris Carey scored but time ran out for his team.

So this year’s JCT campaign has produced a repeat of last year’s final. Blackrock have had three conclusive wins but Belvedere have been given more testing games. Both schools play an open and exciting brand of rugby .Sunday’s final should be an enthralling encounter.

Curiously, fifty three years ago on March 23rd (the same day as this year’s final) Belvedere defeated Blackrock 8-3 in the JCT final in Lansdowne Road. Will history repeat itself?

Tickets are priced at €;15 for adults and €;5 for pupils and can be only purchased on the turnstiles. Belvedere are entering via turnstiles 2 and 3 with Blackrock to enter through gates 4 and 6.There will be no parking available in Tallaght Stadium but The Square Shopping Centre has kindly agreed to free parking for level  3 for all those attending the match. Gates will open at 1.30pm sharp for the general public and vendors will be open within the Stadium.

The Schools’ Committee wishes to thank South Dublin County Council, and in particular Nicola Coffey, for the use of their superb facility.