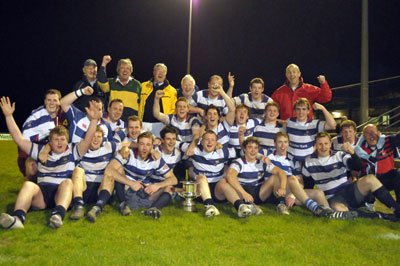 Last time round, Belvo knocked ’Rock out at the semi-finals stages but former Ireland ‘A’ international Emmet Farrell produced the vital intercept try with the scores locked at 15 all.

He converted himself before adding a late penalty to record a 25-15 win for the side. In a family affair, the side featured three sets of brothers – the Maguires, Costigans and Lumsdens – while winger Andrew Elliott’s father Phil was the head-coach.

Michael Jackson – a winner in 2009 – scored a brace of tries for the Stradbrook club after Belvo had started the stronger, leading 8-0 after Simon Kileen’s 27th minute try.