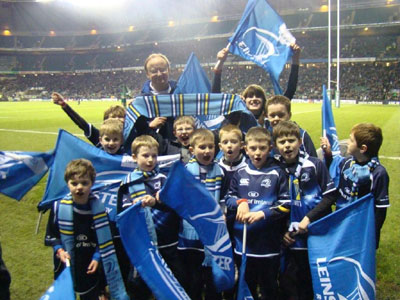 Having gotten the travel bug last year when they travelled for the Leinster/Wasps pool game at Twickenham, they have subsequently combined away Leinster trips with matches against Shannon in Munster and Belfast Harlequins in Ulster.

Last Saturday, they paid a return visit to Twickenham where they were asked to participate in the pre-match Guard of Honour.

Unfortunately, concerns about the state of the pitch forced the cancellation of the Guard of Honour but the boys participated in a half-time parade instead where, despite being outnumbered by the London Irish supporting clubs, they roared themselves hoarse in an effort to drown out their opponents.

London Irish had a special welcome for Eric O’Connor, who was a Leinster match day mascot last year, as Eric has just returned to rugby after having had treatment for Leukaemia.

It was also a special day for Joe Kyne who was celebrating his birthday. The boys are hoping for better results when they tour. Following three straight losses, Saturday’s draw was a significant improvement, but they are still chasing the elusive win.