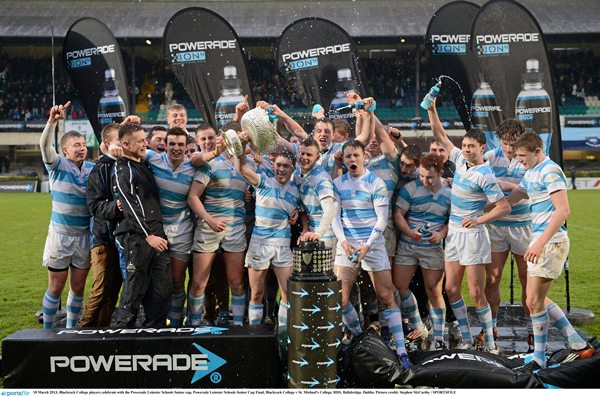 Blackrock had to work their way around a strong breeze in the opening period, but inside centre Gary Ringrose has proven himself to be a reliable place-kicker throughout this year’s campaign, and brilliantly converted a difficult 35-metre penalty with just three minutes gone.

However, St. Michael’s showed exactly why they came into this decider as reigning champions just four minutes later. Excellent spade work by half-backs Ross Byrne and Nick McCarthy paved the way for captain Ross Molony to power over for the first try of the afternoon.

The influential Byrne added the conversion for a 7-3 lead and with Blackrock suffering a further set-back when Zack O’Hagan departed with a 10th minute injury, it appeared that things were going according to plan for the holders.

Blackrock displayed great resolve as the first half wore on though, and the excellent Ringrose added to his second penalty on the 15th minute mark with a terrific breakaway try.

Ringrose managed to dispossess Josh Murphy near halfway and he raced away along the left touchline to score a fine individual score which he converted himself.on the left flank.

Blackrock out-half Peter Quirke split the posts beautifully with a perfectly measured drop goal 20 minutes in, and suddenly Peter Smyth’s side found themselves in possession of a 16-7 cushion.

This forced St. Michael’s back on the offensive and although powerful flanker Alex Penny went close to touching down, dyamic full-back Cian Kelleher did manage to cross the whitewash with a simple finish at the end of a sweeping 27th minute move.

This helped last year’s double winners to settle back into the proceedings, before a second successful conversion from Byrne reduced the deficit to 16-14 for half-time.

With events delicately poised at the Ballsbridge venue, it was no surprise that in contrast to a pulsating and event-filled first half, the second half was far cagier in nature.

Indeed, with each score having the potential to turn the game on its head, the accuracy of the respective kickers would go a long way to deciding the eventual outcome of this showpiece occasion.

In this respect, St. Michael’s were fortunate to have a player of Byrne’s calibre at their disposal, and he coolly slotted over a 25-metre opportunity just eight minutes after the restart, which moved the Ailesbury Road outfit back into the ascendancy.

Having reasserted their superiority, St. Michael’s sensed that they could push on for their third Senior Cup title. Byrne duly found his range once more with a three-point attempt from a right hand angle.

Armed with a 20-16 advantage, St. Michael’s looked like they were going to do just enough to retain their title.

But the tremendous Blackrock spirit which saw them recover from a sizeable deficit in their semi-final win over Cistercian College Roscrea was in full evidence during the closing stages of today’s decider.

After a long spell of pressure towards the opposition line with Sean Coughlan making the initial surge, his back-three colleague Power pounced to touch down in the left corner.

With six minutes remaining, Blackrock had the finish line in their sights and thanks to another fantastic conversion by Ringrose wide out on the left, they suddenly had three points to spare over their great rivals.

Ringrose came up short with a 69th minute penalty, but with Smyth’s charges camped in the St. Michael’s half during the dying moments, they were to able to hold out for a truly memorable success.