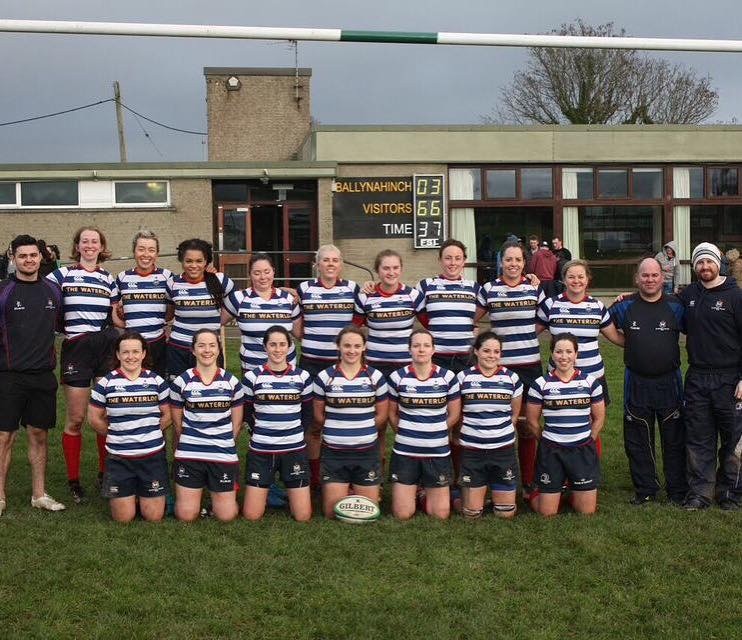 The Westerners had recorded two narrow league victories but Blackrock were determined to get back to winning ways in the Cup and got off to the best of starts.

Dawn Smith collected the kick-off and following the first ruck, Carmela Morey picked a good line off Niamh Griffin to break through the defence from her own 10 metre line. Having gone past the full-back, Carmela offloaded to back row partner Mairead Holohan just before she was caught.

A scrambling Galwegian defender managed to bring Holohan to the ground just short of the line but she was able to pop the ball up for Carmela Morey to gather and dot down over the line. Out-half Michelle Claffey struck a good conversion to give Rock a 7-0 lead in the first minute.

Galwegians put together a good passage of play around the 15 minute mark pushing Rock back into their own 22. Following a number of phases of aggressive attack, they were able to move the ball through the hands from left to right and score out wide. The difficult conversion attempt was missed into the slight breeze.

Rock had territorial advantage for the remainder of the half and put together some cohesive passages of play but could not add to the scoreboard.

A couple of inopportune knock-ons or the occasional wrong decision just prevented a deserved second try. The half time whistle saw the score-line remain 7-5.
With the away side hoping to dominate in the second half, it was Rock who began the brighter. The urgency in defence was evident with Michelle Claffey, Amy O’Neill, and Ann-Marie Rooney pressurising the backline all afternoon.

The set-piece provided the platform for Rock’s next score. Carmela Morey picked off the base of a solid scrum and fed Niamh Griffin. The midfield of Claffey, Carrie Hanley and Eimear Corri then produced a clever move to send Corri free around the outside of the defence and she produced a trademark finish to get in under the posts. Claffey added the extras.

Galwegians had to chase the game at this point but Rock were solid in defence in particular in their own 22. A penalty had reduced the deficit by a further three points but a knock-on by the right winger was capitalised on by quick thinking Niamh Griffin who showed great speed to run 80 metres and score Rock’s third try. Another successful conversion made it 21-8.
With Galwegians throwing everything at Rock in the final quarter, another break-away try looked to have sealed the game. Michelle Claffey read a pass in her own 22 and intercepted. She broke through the initial tackle and took off up field with three Galwegian players in pursuit. All three made gallant efforts to catch Claffey but her power saw her go under the posts to make it 26 and then 28.

The game looked over and the 20 point lead remained with seven minutes to go but a dramatic finale soon began to unfold.

Galwegians scored a converted try which looked like a consolation score but then quickly added a second to leave only six between the teams with three minutes to play.

Rock won possession high up the pitch and played a few phases but Galwegians turned it over and went looking for a line break. The Galwegian centre Emma Cleary got through and made it across the half-way before a scrambling Rock defence got back. A knock-on on the next phase brought an end to proceedings and relief for the Blackrock players as Galwegians ran out of time.

The Blackrock performance was rewarded with a place in the last four next month.