Boyne Prepare For The New Season & The Future… 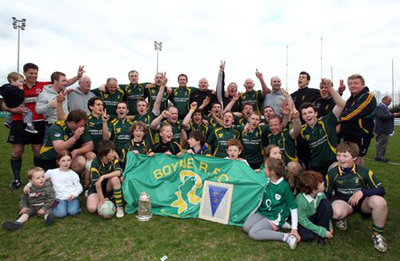 Activity down on the Ballymakenny Road grounds in Drogheda is pretty hectic at the moment and it’s not just rugby that is occupying the minds of the members of the club.

Contractors have moved into the clubs grounds during the past few weeks and work has commenced on the ambitious development plans that have been initiated by the club President, James Tallon, and the development subcommittee under the chairmanship of Paddy McCleery the ex Skerries RFC stalwart who is now attached to the Drogheda club.

As Paddy says, “It was imperative that we improved our playing conditions and brought them into line with other clubs as well as making sure that future generations of rugby players in the club would not have to endure sub standard playing surfaces. We embarked on a number of fundraising projects and had several meetings with the membership to advise them of what was needed and seek their support to source this development. It has been very hard work and we have received sufficient support to commence the first phase of our plan.

“This will involve the fencing off of our grounds and the laying of our first all weather pitch. I’m pleased to say that this work has started. The next phase will include the second all weather pitch and the installation of floodlights. We are upgrading Shamrock Lodge to the required standards and this will be our home for the foreseeable future.”

Paddy concludes, “We would like to thank those who have brought the development to this stage but, says that there is still a long way to go and much more support is needed before our plan is completed”.

During the period when this work is in progress, Boyne 1sts will play their home AIL games on the remaining pitch available at The Lodge. Should weather conditions prevent them from playing on this pitch, discussions have taken place with Drogheda United FC officials to accommodate fixtures at Hunky Dory Park.

Training has been in progress for the past few weeks under club coach, Craig McGrath, from New Zealand, preparations will intensify over the coming weeks before the action starts in the Leinster Senior League at the end of August.

Saturday, 13th August will see an action packed day at the club. All players will be involved in a series of games before the real action starts on the following Saturday. The evening will see last year’s Player Of The Year awards presented. Also at this function there will be announcements and revelations regarding new players that have signed for the club as well as an up to date statement on developments in the club.

Club PRO Seamie Briscoe stated, “There has been a huge amount of activity during the summer months covering many aspects that includes dealing with the playing side as well as the future development of the club. Various officers and members have been immersed in these issues and the coach has also been in constant contact with the rugby committee in keeping himself informed and contributing to the details of what has been going on.

“However, a number of these issues have been highly sensitive and will not be revealed to the members and public until the evening of Saturday the 13th of August before the season proper commences the following week. This will include the announcement of the coaching staff, fixture arrangements, new players, development funding, pitch arrangements and the presentation of last year’s awards”.

Seamie goes on to say, “All club members and anyone interested in the club are welcome to come to this function and they will be brought up to date on all of these issues”.

The recent success of the Drogheda based club has meant that huge numbers have become interested in rugby in the area and the club now has over 350 young members attending for training and playing. Boyne has been one of the most successful youth development clubs over the years, supplying many players to senior and representative rugby. Now that they have attained senior status they are determined to keep these players at the club and have embarked on a development programme for the future.