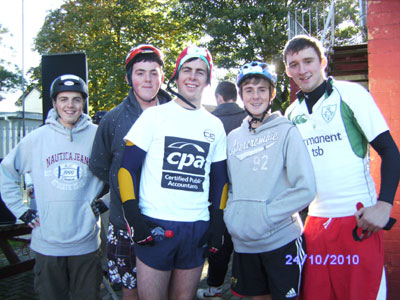 The event was controlled by The Drogheda Wheelers who lent their considerable expertise to the occasion and provided Marshals along the 10 kilometre course. The club could not have asked for better weather conditions with not a cloud in the sky on a beautiful Autumn day.

The cycle was the brainchild of Bernard Gogarty and Tony McKeon, both prominent members of the club, who are ardent cyclists. The organising committee was led by Ger De Loughrey and Paddy McCleery and in conjunction with the local Gardai and Order Of Malta the cyclists were very well looked after in terms of welfare and safety.

The route was scenic and took in some lovely vists of the Mournes and Cooley mountains along the route. The more serious cycling participants were started first and the more leisurely enthusiasts followed behind at their own pace.

This venture is one of the many that the club are organising to fund their intention to install all weather pitches and floodlighting at their Shamrock Lodge grounds on the Ballymakenny Road in Drogheda. The club is ever expanding and has now more than 300 mini players on their list along with teams from Under-13 to Under-19 levels.

Their senior team is leading the Leinster Division 1A League at present and the club is buzzing with enthusiasm at the moment. Last weekend’s venture was a first for the club and is in keeping with the clubs policy, under its President, James Tallon, to include parents, players and members in an all embracing aim of supporting the club in its efforts to provide the best facilities for the future.

Boyne’s President, James Tallon, would like to thank the Order of Malta, Gardai and Drogheda Wheelers for their magnificent support and contribution to the success of the day.