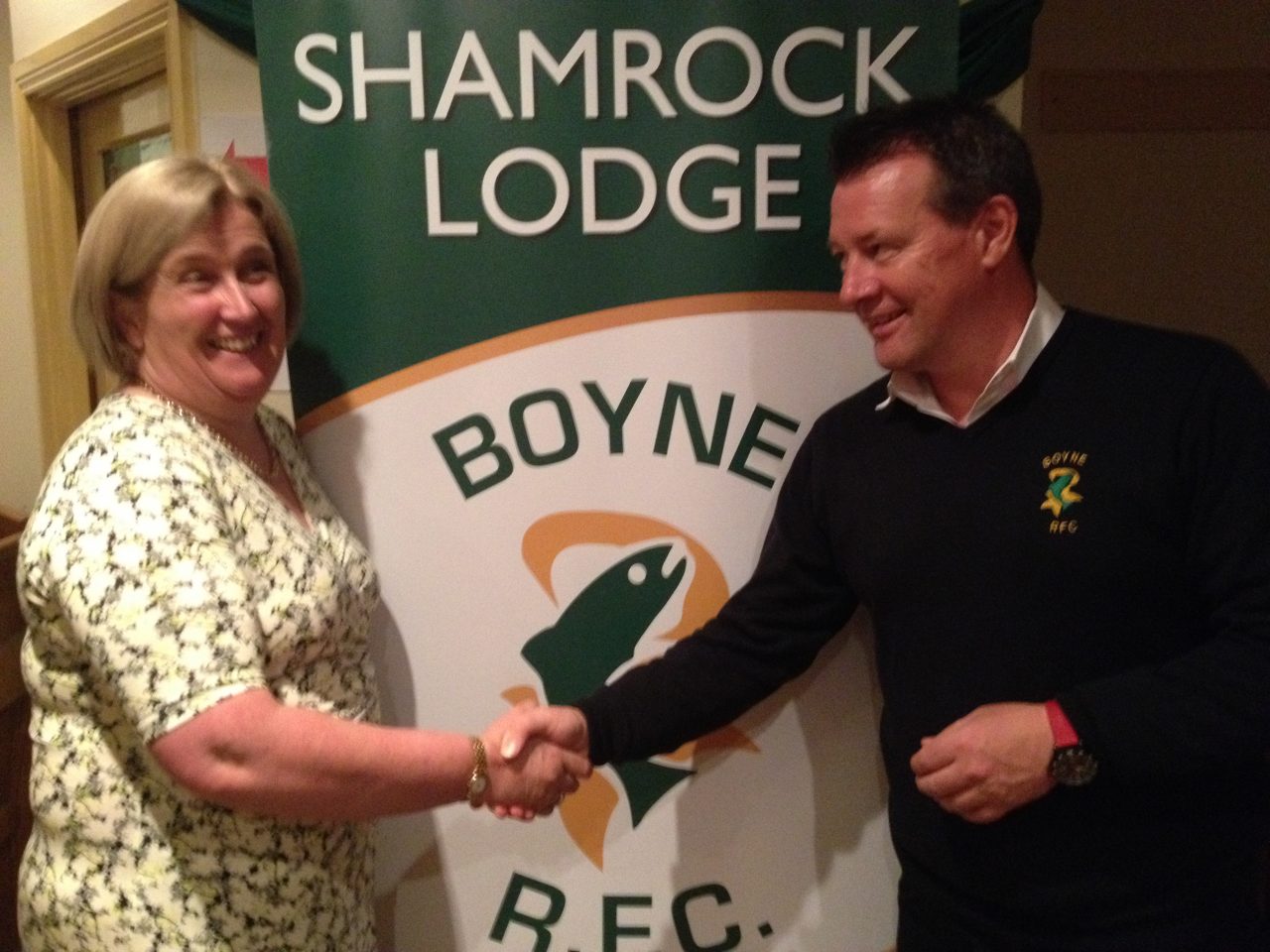 History was made at the Annual General Meeting of Boyne Rugby Club at their recent AGM when, for the first time in the history of the game of rugby in the Drogheda area, a woman, Phoebe Leonard, was elected to the prestigious position of President of the club.

Leonard, from Julianstown, Cio Meath has been a very active member of the club during the past fourteen years and whilst of a quiet disposition, nevertheless, has gained the respect and admiration of the clubs membership which saw her take the role of President in front of the attendance at last weeks AGM.

Originally from the Sandymount area of Dublin where she was born and reared only a stones throw from Lansdowne Road, Phoebe was a member of a multi sports household and her own sporting interests started off with tennis and hockey. She openly admits;  “If ladies rugby was as prominent then as it is now, I would definitely have played the game”.

Phoebe first came to live in the Drogheda area fourteen years ago with her husband, the late Ed Prendergast. Both of them were rugby enthusiasts and they were introduced to Boyne Rugby Club by their neighbour and subsequent good friends, Leo and Aisling Monahan. As Phoebe says; “Our love affair began with the club back then and after a short period of time my husband Ed, took a prominent role in the clubs affairs having been elected to the executive committee as well as our sons joining its mini section”.

Unfortunately, tragedy struck the Prendergast family all too soon, when Ed succumbed following a serious illness leaving a major void in the club and the family. In keeping with her husbands tradition, Phoebe’s interest and intensity with Boyne Rugby Club increased and she very admirably continued in the role her husband had previously initiated. She was elected onto the clubs executive committee and continued to play a big part on the clubs development sub-committee at the then Presidents request, James Tallon. Her devotion to that task drew huge respect from the members along with her support for every aspect of the clubs activities. Her most recent major event was spearheading the first ever Boyne RFC “Ladies Lunch” in the City North Hotel, when along with Alison Comyn, Anne Carlos, Emily Cummins and Judith Chalmers, this function turned out to be a huge success in terms of enjoyment for nearly 300 ladies who were thoroughly fascinated by the wonderful, Joanne O’Riordan as well as generating much needed funds for the clubs development.

In spelling out her aspirations for her term of office, she paid tribute to the great work carried out by her predecessor, Robbie McGrath and thanked him for his encouragement to her in taking up the role of President. She stated; “I look forward to working with the incoming executive committee and developing the playing facilities for the players in the club”. She appealed for support from the membership of the club stating; “Our club is now going into its 4th season in the AIL which is something previous generations of members and players had always dreamed about. We need everybody’s support for our team and the coaches. We are tremendously excited that our own Niall Ronan has come back to us and will be Director Of Rugby who, along with Mike Walls and Cillian Duffy, we have a young enthusiastic trio who have already started to ignite the interest and enthusiasm among the members and playing fraternity”.