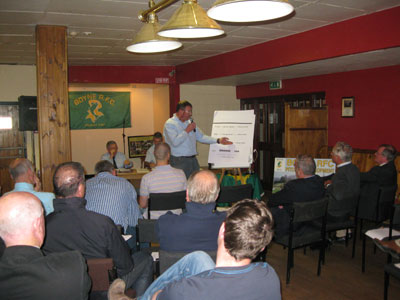 A large crowd of club members turned out for the event which was preceded by a Special General Meeting that endorsed the plans of the clubs Development Sub-Committee to go ahead and upgrade the grounds and seal off the clubs property.

There were four very special “Guests” adorning a table in front the top table. These “Guests” were in the form of silverware won by the club this year at Leinster Provincial level. Pride of place was the Eddie Egan Trophy which was won by the clubs senior team, the Under-19’s went one better and done the double and had the League trophy and Cup on display. Then there was the McAuley Cup which the clubs under 15’s won to complete a fine season at all levels for the club.

The EGM was opened by the club President, James Tallon, who praised the work of the Development Sub Committee and stated that the club must improve their facilities for the future. He handed over to Paddy McCleery who is the Chairman of the Committee and the plans to date were outlined to the meeting. This meeting concluded with long serving member and founder of the club, Leo Monahan, illustrating the intentions of the fundraising side of the venture.

The meeting unanimously endorsed going ahead with this development which will now start in a matter of weeks.

The AGM proper followed this meeting and all aspects of the clubs activities were very well reported and illustrated by the President, James Tallon, and Secretary/Treasurer, Reggie McHugh, in their addresses to the large turnout. Special praise went to Craig McGrath who received rapturous applause in his absence, (on holidays) Eoin Collins his assistant coach and the first team players for the honour they had brought to the club.

The youth section coordinator, Brian Doherty, also gave an outstanding summary of a very successful season at this level and reported that Boyne were now back among the top youth clubs in the country. He was followed by the Mini’s coordinator, Marc Lynch, who delivered a very comprehensive report on an extremely vibrant sector which saw great input from parents that involved trips to Cork Constitution and Bruff in Munster and Armagh in Ulster. Both of these sections cater for over 300 youths and children which was growing every year with the popularity of rugby at an all time high.

There were also other commendations, most notably the grounds and premises staff, members of DFS Ltd which is a Community Employment Project supplemented by FAS and does tremendous work for the club throughout the year.

The meeting finished with some very generous comments from the floor to the outgoing committee, most of whom were returned to serve for another term.

Earlier in the week, the outgoing Executive Committee, made a special presentation to former President, Paul Carlos, who had presided over the most successful period of success in the club’s history. He is stepping down from executive committee duties but will continue to serve on the rugby committee of the club for next season.