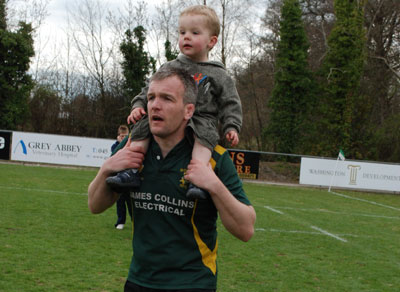 However, there is one individual in the club who has defied all the odds to be a major part of this successful period and the story of his achievement should be an inspiration to all young rugby players.

Rugby football has been a part of Ian O’Reilly’s life since he was a very young child. His father Marty played for Delvin RFC in the 1970’s and ever since Ian could walk he accompanied his father to all the games. His first duties in rugby were to run the line in his very early teens and all referees respected the young man’s authority and fairness in performing this task.

Unfortunately for Ian, he was slightly ahead in age terms when youth rugby started to seriously take off in the Delvin club. So he missed out on all of the success that was achieved during those years. He did graduate to adult rugby at a young age and was also an outstanding athlete taking part in several marathons. As time progressed, the fateful amalgamation between Delvin RFC and Drogheda RFC took place and Ian’s dedication and commitment to training continued in the new club.

He was part of the first team squad, although as time marched on, Ian was not a permanent member of the team. But, he was always there never complaining as to what team in the club that he was picked to play for at the weekend. Ian saw many of his fellow players retire and go off into the sunset but he persevered and extraordinarily won PTC medals at 3rds and 2nds levels. Many players would have been contented to have achieved such honours in what should have been the twilight years of their playing careers. At this stage Ian O’Reilly was well into his 30’s but, he continued to train and retain his wonderful enthusiasm for the club and the game.

The arrival of Craig McGrath to Boyne RFC saw Ian O’Reilly figure prominently in the Kiwi’s plans and Ian was an ever present in the 2nd row for the club’s inaugural Towns Cup victory in 2009. The arrival of young Conor Walsh meant that Ian had to move to the back row at an age when most players look for the easy option. Not Ian, who replaced the formidable Hadley Dryden at No. 6, to win a second Towns Cup.

Does retirement beckon for Ian? Not at all, because he wants to play senior rugby next year having added another achievement to his career in winning the Leinster League Division 1A this season as a back row player playing as well as ever at 38 years of age. When one considers that in his role as an IT technician, he travels very extensively abroad, but still manages a schedule to fit in his time to train for rugby. Ian is the proud father of three young children and is greatly supported by his lovely wife, Ciara and family. Such commitment and dedication deserves very special mention to an individual who has given tremendous service and loyalty to his club.