Bring a fan home for Christmas… 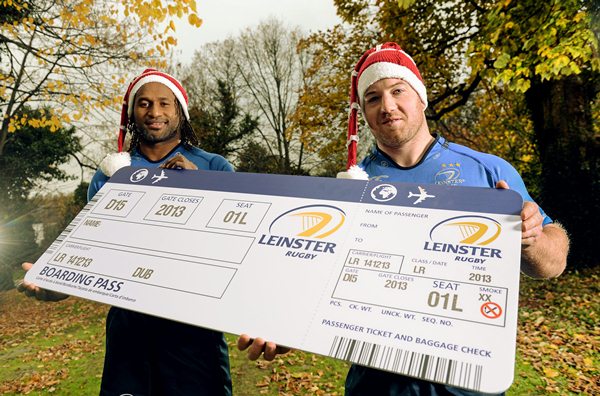 Leinster Rugby today announced the ultimate Christmas gift for families with the launch of the ‘Bring a Fan Home’ competition.  Leinster supporters around the globe are in with the chance to win two return flights to Dublin from anywhere in the world as well as a whopping €;1,000 spending money, two VIP tickets to the annual Christmas Cracker game on December 14th and Leinster goodie bags.

Entries will be accepted via the official Leinster Twitter or Facebook accounts. Followers must get creative and prove they are the biggest Leinster supporter living abroad, and deserving of a Christmas trip home, via a 100 word status update on Facebook, a 140 character tweet, an image or video. All entries on Facebook and Twitter must include #LeinsterRugby and adhere to the word/character limit to be in with a chance of winning.

Entrants must be able to fly home in time for Leinster’s titanic clash with Northampton Saints on the 14th of December, 2013.

Speaking at the launch of the campaign, Michael Dawson, Chief Executive of Leinster Rugby, said, “We were very keen to run this competition this year as we are very much aware that the Leinster diaspora is worldwide.”

“What better time to give something back to Leinster supporters than at Christmas. We look forward to giving a lucky supporter plus a friend the opportunity to come home to their families and enjoy the Christmas Cracker game.”

The ‘Bring A Fan Home’ Campaign runs until Wednesday, 4th December at 10am EST, on www.facebook.com/LeinsterRugbyand www.twitter.com/LeinsterRugby using the hashtag #LeinsterRugby. All competition details, as well as ticket information, ahead of the upcoming Northampton Saints game at The Aviva Stadium are available at www.leinsterrugby.ie. Tickets can also be purchased from Ticketmaster outlets nationwide.