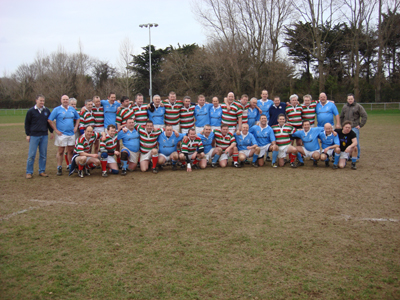 While the players might have felt the strain of their years by the end of the match, the spectators were rewarded with an hour of rugby played between two groups of players who reminded that while it is competitive rugby can also be fun.

With two sets of brothers on the Bective team –Piaras, Odhran and Maeliosa (WeWa) Power and Ross, Emmett and Shane Sheridan – relations really mattered on the day.

The all-round sportsman, Dan Larkin, of the Garryowen team had played with Bective many moons ago and was quite at home in Donnybrook along with another shining light of Garryowen’s past, ex-international Nicky Barry.

The host team then finished off a good outing by bringing the Garryowen players to the pre-match lunch as their guests.

As the Garryowen Vets’ motto says “The Older We Get the Better We Were!”