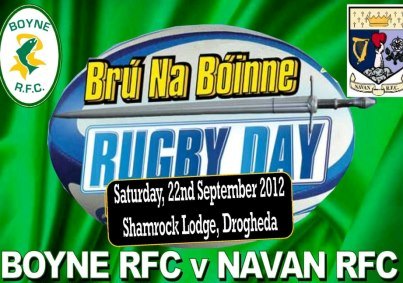 The ‘Battle of the Boyne’ rugby protagonists, Boyne & Navan, have now established an annual feast of rugby which features every team in their respective clubs in what has now become the annual fixture called ‘Bru Na Boinne’.

On Saturday the 22nd of September it is the turn of Shamrock Lodge, the home of Boyne Rugb Club, to host the event and from 10am on Saturday morning until 8 o’clock on Saturday evening the grounds will feature rugby football for all ages and will also feature girls rugby.

Ironically it was two ‘foreigners’ who spawned this very novel event. Boyne coach, Craig McGrath and the Navan Coach, Leon Jordaan, who came up with the idea of all the teams from both clubs competing against each other in a festival of rugby, with the winners being assessed on the results of all the games played throughout the day.

The festival then acquired the name of ‘Bru Na Boinne’ because of both clubs proximity to the famous river.

Last year proved to be a huge success when the inaugural event took place in Balreask Old the home of Navan RFC. This year Drogheda will stage the days festival of rugby and Boyne will be hoping to turn the tables and win the ‘Bru Na Boinne’ for the first time.

The time table of games in their various categories are as follows:

This is a feast of rugby which will feature mini’s, youths and the senior teams of two of the most progressive development clubs in Leinster over the years..