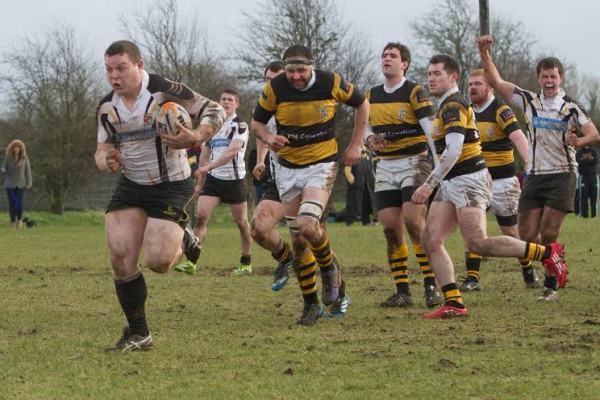 Although Newbridge sit two divisions above Carlow in the Leinster League, this game was winnable by Carlow who led at one stage by 10 points to nil.

With the wind behind them Carlow started strongly and in the fifth minute were 3 – 0 ahead with a Billy Murphy penalty. Five minutes later Murphy was wide first with a drop kick and then with an easier penalty than the one he converted earlier.

At this stage it was all Carlow and on the half hour number 6 James Nolan burst through for a try beside the posts. Murphy converted to go 10 nil ahead.

In the 35th minute Newbridge broke out of their own half and converted a penalty from 35 metres out in front of the posts but for the rest of the half Carlow continued to press for a second try. They had a series of scrums close to the Newbridge line. James Nolan, Barra and Ronan Farrell were all stopped agonisingly short of scoring. Newbridge held out but at a 10 – 3 half time lead Carlow still had hopes of a victory.

The weather worsened in the second half and Newbridge’s Kiwi out half played the corners at every opportunity but Carlow were defending well. In the 19th minute Billy Murphy was yellow carded for a high tackle in the centre of the field. Newbridge converted the resultant penalty to bring the score to 10 – 6.

Against 14 man Carlow Newbridge started turning the screw. There followed a series of five yards scrums on the Carlow line. Whereas in the first half Carlow bossed the scrums, Newbridge had now gained the upper hand. Twenty nine minutes into the half the referee ran under the posts and awarded Newbridge a penalty tries. The conversion but them 13 – 10 ahead.

For the remaining 10 minutes Carlow, urged on by a vociferous home support, managed to reach the Newbridge line. A penalty kick to make it a drawn game was held up by the wind. Carlow were left to rue what might have been.

However, the Oakpark side continue to press for promotion in the Leinster league. This promotion is now within their grasp. Next week Carlow have a crucial home League game against North Kildare and Club President Andrew Dooley urges supporters to come out again in numbers next Sunday.