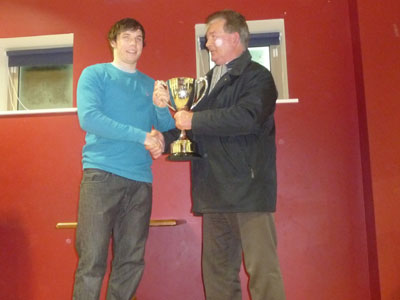 This new competition now in its third year was primarily set up to honour Eddie Melvin for all the work he has done over the years with both Coolmine Rugby Club and Castleknock College. Eddie, who retired from teaching several years ago, still retains a coaching role in Castleknock. He successfully guided the 1983 senior squad to a cup final place that season; however he is best remembered for keeping the fun side uppermost to the forefront despite the pressures of college competitive rugby. A former president of Coolmine Rugby Club, he is still retains a coaching role in Coolmine.

As well as honouring Eddie this fixture also introduces college players to their local club, strengthens the ties between both and will hopefully encourage them to continue playing rugby with Coolmine when they finish with their college. Earlier on in the year Coolmine Rugby Club and Castleknock College hosted a Festival of Rugby last in the college grounds. This inaugural event was a great success with over 120 players taking part. This year Castleknock brought a 1st year side with them also who took on a Coolmine selection as a curtain raiser.

This match consisted of two 15 minute halves. As with last year’s fixture below freezing temperatures greeted both supporters and players and a driving shower of snow came down as both teams left the dressing rooms. Castleknock kicked off deep into the home sides 22 and remained there for the opening minutes of the game; they were eventually rewarded for their efforts with a Daniel Duggan try after 6 minutes. It was then Coolmines turn to apply pressure from the restart. Several phases eventually gave them a man over on the right wing but they failed to capitalise what was a certain try however they managed to retain possession and two minutes later Adam Saviour took crash ball to touch down under the posts duly converted by Niall Somers to put Coolmine 7-5 ahead at the break.

Castleknock were first to score in the second half, Carl Keogh managed to cut through the Coolmine defence for the visitor’s second score of the game. Jack Grafton failed to put the easy conversion over when the ball blew off his kicking tee just when he was about to strike it. Coolmine fought back hard and dominated territory for the remainder of the game however a loose ball deep inside the Castleknock 22 was snatched by Sean Gibbons who outpaced everyone to run the length of the field and put the game out of Coolmines reach with Grafton making no mistake with the conversion this time. Final score 17-7 to Castleknock.

Next up was the main event of the evening, Coolmine taking on Castleknock’s senior cup team. These matches are always tight affairs and Friday nights match was no different. Castleknock were first on the scoreboard with a converted penalty after 6 minutes, Coolmine replied with a penalty of their own 2 minutes later to level the scores. Eleven minutes into the half and Castleknock had the first try scoring opportunity of the game, a slick back move had the Coolmine defence stretched but the cold conditions made ball handling difficult and the ball was knocked on letting Coolmine off the hook. The remainder of the half saw both sides exchanging penalties, John Fitzgerald for the home side managing to outkick Castleknocks Tom Shields to put Coolmine 9-6 up going into the break. The second half saw both sides going over the whitewash.

First an intercept try for Castleknock after 12 minutes, James McCormack running from inside his own half uncontested. The conversion plus a penalty 5 minutes later put Castleknock 9-16 ahead. With the clock running down Coolmine battled on and Michael Connelly sneaked into the corner in the dying seconds to give Coolmine some chance of levelling the score however John Fitzgerald’s difficult conversion attempt went agonisingly wide of the upright. Final score 14-16 to Castleknock.

Later on in the clubhouse Coolmine President Pat Sheehan welcomed principle Oliver Murphy and all from the college to the club. Then the man himself, Eddie Melvin, presented Castleknock’s captain Conor O Riordan with the trophy. There were man of the match presentations made to one player from each side. Shane Scott for Coolmine and Conor O’Riordan for Castleknock. Best of luck from all in Coolmine to Castleknock College for their upcoming senior cup campaign.