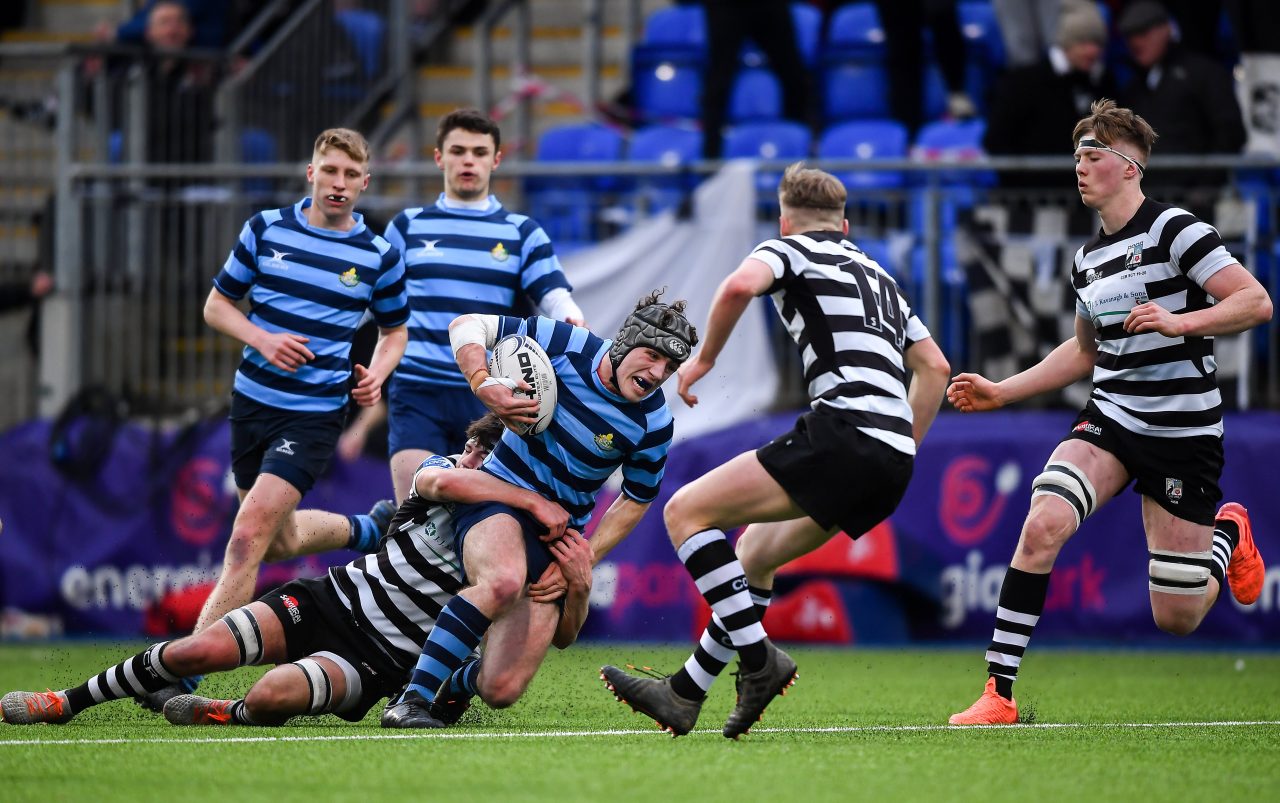 Castleknock College have knocked Cistercian College Roscrea out of the Bank of Ireland Leinster Rugby Schools Senior Cup after a scintillating finish at Energia Park.

Leading by 19 points midway through the second half, by the end Castleknock were fearing that they would suffer a similar fate to Blackrock College in yesterday’s opening tie of the round.

However, the north Dublin school were able to hold firm when it mattered most and clinch the seven-point victory.

Castleknock started on the front foot and thought they had the first points on the board when Ian Birmingham evaded a tackle and darted for the line only for a wonderful ankle tap from Oisin McCloskey to halt his progress.

They recycled the ball quickly and despite a slight fumble in the backfield, they got Fergus Stanley over from close range.

Roscrea responded well and made their first expedition into Castleknock territory, and were rewarded with a score of their own.

When granted a penalty for offside inside the ’22’, they went for touch and a strong lineout, followed by an equally impressive maul, resulted in Martin Fallon dotting down in the corner beneath an avalanche of bodies.

A difficult conversion attempt was just short and Roscrea remained two behind. Conall Bird almost altered that fact just moments later with a mazy run before Alex Watson was able to bundle him to touch just shy of the line.

Instead, it was Stanley who got the next score, his second of the day, after 25 minutes. He fended off a tackle and held on to ground against the post.

They added to the scoreboard again before the break when prop Ben Griffin gave a clever offload to Conor Dunne who had the legs to win the race for home and allow McDonough to kick a third conversion from close range.

The early second half play was largely a battle of the boot with both teams vying for territory over carrying the ball in hand.

It got worse for Roscrea when Fionn McWey Fingleton was sent to the bin in the 45th minute and McDonough was able to kick three more.

When he did return, he played a big part in their second try. The Roscrea pack working their Castleknock equivalents until Fallon was finally able to breach their rearguard and get his second try.

That effort gave Roscrea renewed hope for the final quarter of an hour.

And when Ben Bilsin received a yellow card soon after, Roscrea found themselves with the man advantage this time, a numerical superiority that they used expertly.

Flanker Oisin McCloskey, operating as an auxilary back to stretch Castleknock as much as possible, showed back-like pace in rushing over for his try with five minutes remaining.

There was one final push from Roscrea but an interception in the Castleknock ’22’ saw them concede possession and ultimately the game.