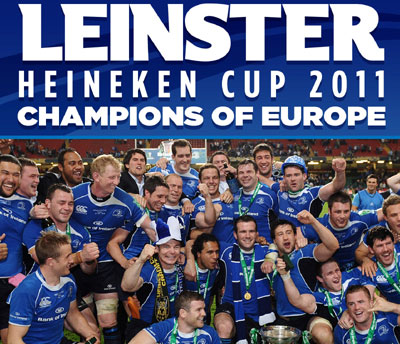 Leinster, led by inspirational captain Leo Cullen and inspired by the brilliant Jonathan Sexton, are Champions of Europe again – and how!

By half time at Cardiff’s Millennium Stadium the 2009 Heineken Cup winners trailed Northampton 22 – 6.  They had been convincingly out-played as the underdog Saints had smashed their way to three tries – there was no way back, surely? Well, this is Leinster and yes there was.

The second half was an Irish storm – an unstoppable surge of Leinster passion, fire and fury. Twenty seven unanswered points … two tries for man of the match, Sexton – 28 points in all for the fly-half. Nathan Hines score confirmed the demise of the English foe and Leinster had European rugby’s ultimate prize once more.

Leinster were a team of heroes, driven by belief and experience with leadership throughout the field.

Relive every extraordinary minute of the most amazing Heineken Cup Final EVER!  Leinster, Heineken Cup 2011 – Champions of Europe on DVD.

Disc 2: The incredible Heineken Cup Final in full plus exclusive interviews and celebrations