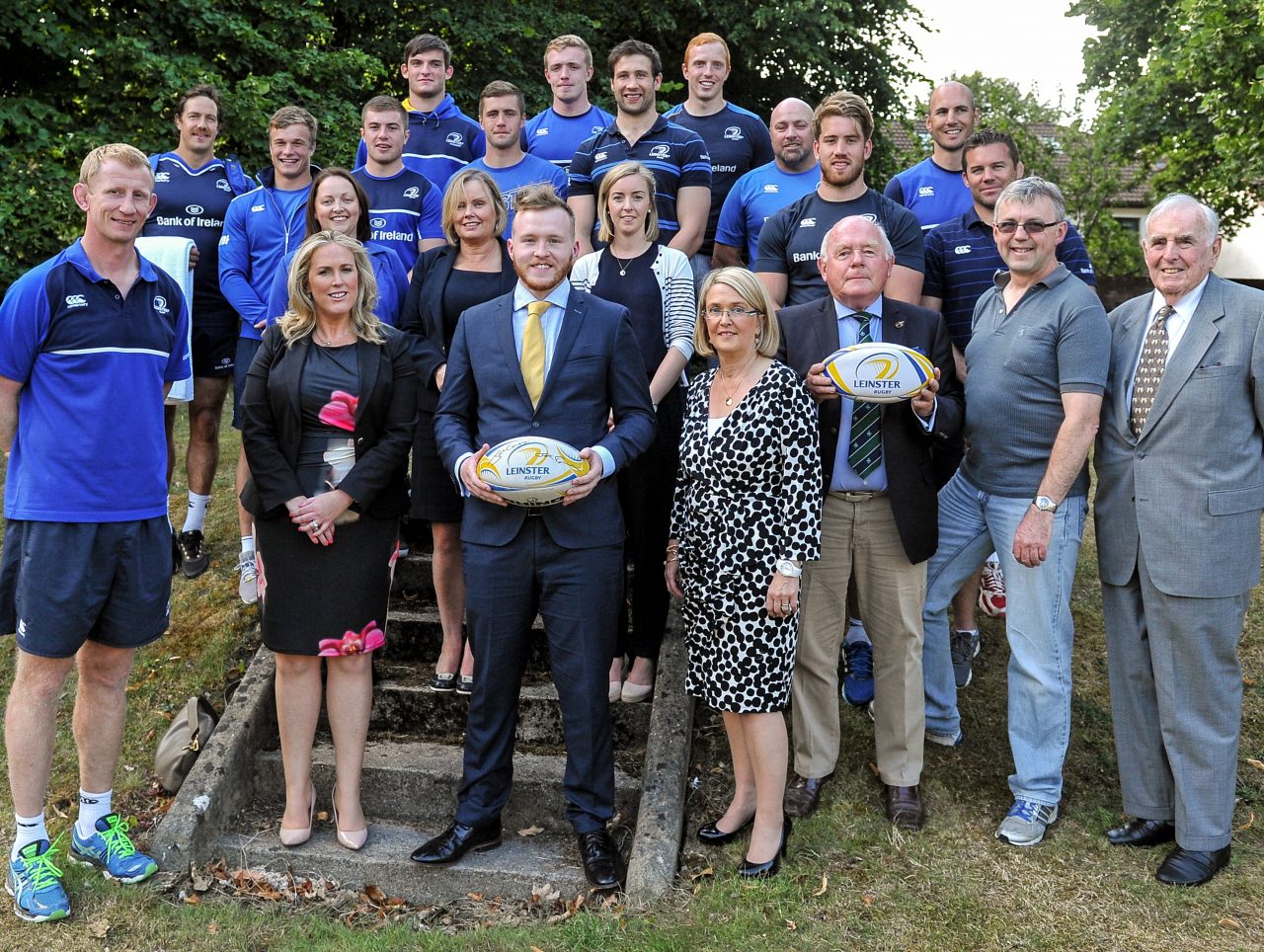 Leinster Rugby have today announced two new charity partners for the season ahead, with The Alzheimer Society of Ireland and Cardiac Risk in the Young confirmed at a special gathering in Leinster Rugby head offices in UCD.

To celebrate the partnership it was also announced that Joe Walsh Tours, official travel partner of Leinster Rugby, would be offering both charities 14 seats on the first Guinness PRO12 trip of the year to Edinburgh, giving the lucky 28 passengers a unique insight into the Leinster Rugby environment as they travel to and from the game with the team.

The Alzheimer Society of Ireland is the leading dementia specific service provider in Ireland and works across the country in the heart of local communities providing dementia specific services and supports and advocating for the rights and needs of all people living with dementia and their carers. It is a national non-profit organisation and also operates the Alzheimer National Helpline offering information and support to anyone affected by dementia.

Cardiac Risk in the Young (‘CRY’) is a charity that aims to raise awareness of the condition known as Sudden Cardiac Death or Sudden Adult Death Syndrome. CRY also provide free counselling and support for families affected by sudden death or cardiac conditions and also support the Centre for Cardiovascular Risk in Younger Persons (CRYP), where families and individuals can be evaluated in a heart screening service in a timely and systematic fashion without financial cost.

At the announcement, special guests from The Alzheimer Society of Ireland and CRY met Leinster Rugby players and coaches and they also got a unique behind the scenes tour of the Leinster Rugby facilities. Leinster Rugby CEO, Mick Dawson outlined the vision for the year ahead.

“This is the second year that we have reached out to the charitable sector with a public tender process and again we were delighted with the response. We had 63 submissions in total and I know from speaking to those involved in the process that the submissions were excellent and each charity was deserving of our support.

“I believe that the CSR Committee and indeed the players, have chosen two excellent charity partners for Leinster Rugby and I hope that both The Alzheimer Society of Ireland and Cardiac Risk in the Young will benefit from the association and that this partnership will leave a lasting legacy with both.

“I would like to thank Cormac Walsh and the team in Joe Walsh Tours for the wonderful opportunity afforded both charities. I think it is a great way to start the season and whether they use the seats to raise awareness or raise funds, we know the 28 on board will have an experience they will never forget.”

Speaking on behalf of The Alzheimer Society of Ireland, Interim CEO and Head of Operations Miriam Enright, said, “We are thrilled to be chosen as official charity partner to the Leinster Rugby Team and are hugely excited about working collaboratively with the team over the coming months. We believe this partnership will give The Alzheimer Society of Ireland the opportunity to raise awareness for the 48,000 people living with dementia in Ireland amongst Leinster’s players and followers and we will be encouraging everyone to support Leinster Rugby in the season ahead. We wish all players the very best of luck and thank them for their support.”

CEO of CRY, Orla Durkan, commented, “CRY are delighted to be chosen as a charity partner of Leinster for the 2015/2016 season. We are extremely grateful for this opportunity and we look forward to working with the Leinster Players and staff. We hope this partnership will help to raise awareness for SADS and raise much needed funds for CRY Ireland.”

In addition to having The Alzheimer Society of Ireland and Cardiac Risk in the Young on board for the season ahead, Leinster Rugby outlined further plans to engage with other charities.

Leinster Rugby media manager and chair of the CSR Committee, Marcus Ó Buachalla, said, “The difficulty in selecting two charity partners from a list of 63 is the charities that don’t get selected. With that in mind we have once again set up an online application form for charities or schools or individuals looking to Leinster Rugby to make a contribution of some kind to their charitable endeavours. We hope to then be in a position once a month to reach out to a further four or five charities with signed merchandise or match day tickets.

“Over the course of the last 12 months in addition to LauraLynn and Special Olympics Leinster who were our charity partners last season, we were able to make a contribution to a further 38 charities across Leinster and we look forward to doing the same this season.”

Further information on the charity partners, in addition to how your charity can apply for support from Leinster Rugby can be found at www.leinsterrugby.ie/charitypartners.