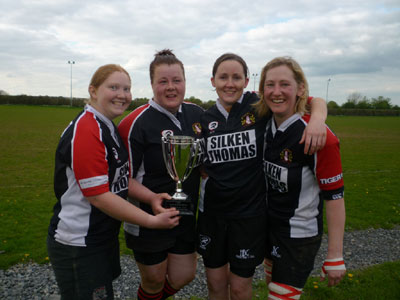 Due to time constraints this year the competition was run as a blitz but it is hoped in future years it will be run as a cup competition possibly over the first few weeks of the season. The cup was contended for by Portarlington, Portlaoise and Cill Dara but again it is hoped that more teams will take part in the future.

The first match between Cill Dara and Portarlington kicked off at 1pm resulting in a 19-10 victory for Cill Dara. The games were played for 15 minutes each way. Next up was Cill Dara against Portlaoise, there was very little between the sides but Portlaoise managed to take a narrow 7-0 win. Then it was time for Portarlington to take on Portlaoise which ended with Portlaoise on top.

The top two teams, Cill Dara and Portlaoise then went into a final. Cill Dara clearly upped their game and got in for an early try that would later prove crucial as the sides finished tied at 7-7 pushing the game into extra time. The score remained the same after extra time and Cill Dara were declared winners owing to the fact that they scored the first try.

The Cill Dara Ladies players and coaches were delighted with the win and getting to take home some silverware after a tough day’s rugby and lot of hard training throughout the season.

Overall it was great day out to finish the season with Portarlington getting an opportunity to honour Ann Fitzpatrick for the contributions she made towards their club.