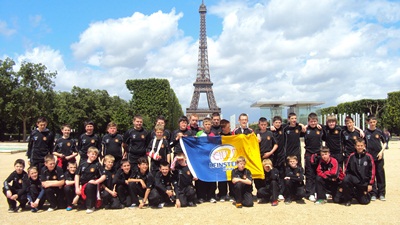 After a year of planning and fund-raising, the Under-13 squad from the Curragh-based, Cill Dara Rugby Club, travelled to France last weekend to compete in the ‘Challenges Rugby D’Orsay 2012’ tournament held just outside Paris…

The 36-strong squad along with coaches, mentors and parents spent two days enjoying the Parisian sights and the fantastic hospitality of the host club, CA Orsay Rugby, before getting down to the serious business of Sunday’s competition.

As one of the biggest youth tournaments in the Paris area, the attending teams consisted of clubs and rugby academies from the area including such luminous names as Stade Francais and Racing Club de Paris. Cill Dara entered two teams in a tournament and far from feeling intimidated, the children were relishing playing in this illustrious company. The matches were 9 minutes long and played on half a pitch beginning with a group stage.

The first of the Cill Dara teams found the going tough and were unfortunate to draw RC Massy Essonne, the tournament favorites, in their group. Nonetheless they played with great heart and determination in every game which would later prompt the tournament organisers to choose them from among the 80 teams present for the competition’s ‘Fair Play Trophy.’

The second Cill Dara team came through their group as the top second-placed team in the tournament, having lost only to the mighty Racing. This qualified them for the quarter final of the competition’s top tier and a crack at the so-far unbeaten, R.C.P.XV. The Kildare boys raised their game to a new level and won by a single try. This was apparently a huge shock judging by how the losing French coach gathered his distraught players in a circle and admonished them for losing to an Irish team on French soil!

A semi-final against “that” Massy team was next. The skill level displayed by the French boys in the semi was breath-taking and belied their U13 status. Despite keeping the score to 0-0 until the final three minutes, bravery was not enough and Massy won out to gain a place in the final against Racing (it ended in a draw).

The day was not over however as Cill Dara now faced the host club, CA Orsay, in the 3rd/4th play-off in front of a partisan crowd. Despite conceding the first score, the Irish boys fought back and scored two fantastic tries, including one that had French flair written all over it. The sound of the final whistle prompted an Irish pitch invasion and generous applause from the French spectators in the stand.

So the Cill Dara RFC Under-13’s came home with a bagful of wonderful memories and two French trophies to add to the Leinster Plate shield that they won in May. More importantly, they proudly represented their club, their province and their country with distinction.