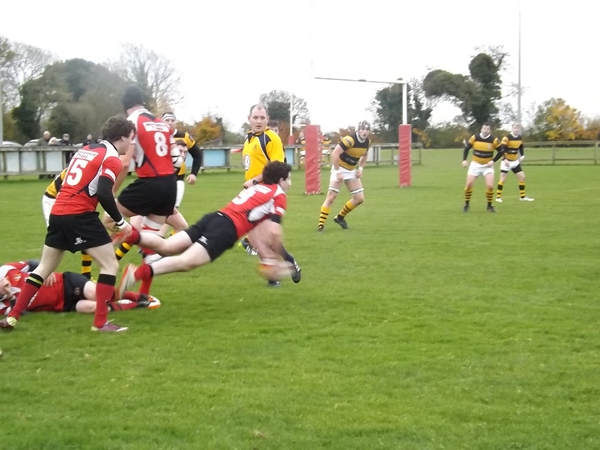 A large and expectant crowd braved the cold conditions at Beech Park on Saturday and rewarded with a thrilling Leinster League encounter between local rivals, Cill Dara and Newbridge…

Nerves were evident among the players on both sides as the opening minutes were error strewn. The result of this game was hugely important as the loser was likely to face into a relegation battle for the remainder of the season. Newbridge opened the scoring in the 6th minute when their impressive out-half, Ben Swindlehurst, kicked a successful penalty. Cill Dara soon responded with a Jack Ryan penalty after Newbridge had infringed during a spell of sustained Cill Dara pressure.

Indeed, the home side were now settling into a rhythm but were wasteful in the final quarter due to a combination of unforced errors and a dogged Newbridge defence. Ryan put Dara into the lead with another three-pointer but it was a small return for all their possession. Newbridge, while limited in attack, impressed with their defensive structure. Swindlehurst marshalled his backs well and Newbridge’s drift defence repeatedly put paid to any attack that Cill Dara tried out wide. Half-time left the score at 6-3 to the home team.

With the stern words of their head coach still reverberating around the chilly Curragh pitch, the Cill Dara supporters hoped that a more focused team would emerge in the second 40 minutes. However, it was first blood to Newbridge as Swindlehurst scored another penalty to level the scores. He missed an opportunity to take the lead with a failed kick but Newbridge were now very much back in the match.

The turning point came in the 54th minute with the sin-binning of Cill Dara winger, Barry Flanagan, for an off-the-ball indiscretion. Paradoxically, rather than give the visitors the momentum, a 14-man Cill Dara finally awoke from their slumber and increased their intensity in attack. Their reward followed minutes later with a superb, multi-phased, try scored under the posts by Darragh Kennedy. Ryan slotted the easy conversion to leave the score at 13-6.

Newbridge’s exertions up to the 60th minute now seemed to have taken their toll and from this point on, Cill Dara now began to dominate all facets of the game. Ryan knocked over two more penalties in the 59th and 62nd minutes to give him a 100% return on his kicking duties and Cill Dara comfortably closed out the game to leave the final score at 19-6.

Best for the home side were the centre pairing of Ryan and Jake Holland with captain, Barry Waters, also impressing especially in the first half when Newbridge were making life difficult. However, it was the veteran Damian Broughall who stood head and shoulders above all as he turned back time with a fantastic performance from the number 8 position. A daunting trip to the league leaders, Wanderers FC, awaits Cill Dara next Sunday but, for now, Beech Park can bask in regaining the bragging rights from Rosetown.