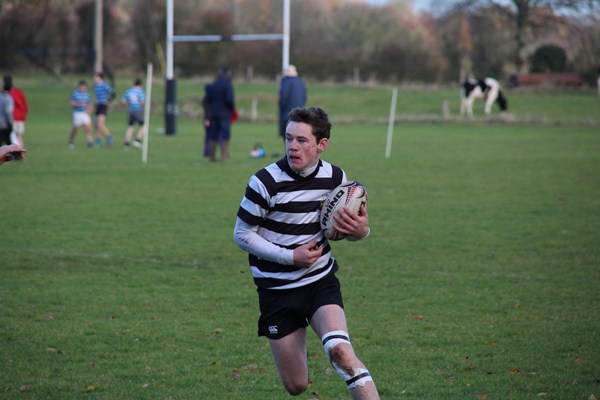 Wesley didn’t get off to a good start, putting their kick off out on the full resulting in a Roscrea scrum. The game’s first penalty went to Wesley after Roscrea were penalised for being off their feet at the ruck. Roscrea flanker Mattie Keane made a good line break followed by quick distribution by scrum-half Daniel Lavelle and Alan Tynan made another break and Dwayne Corcoran looped around and gave the ball back to Tynan who ran in for the try but it wasn’t converted.

Alan Tynan created another attacking opportunity from a received kick and passed it to full-back Tim Carroll who beat a few men before passing it to winger Fionn Higgins who attempted a grubber kick over the try line but it resulted in a 22 drop out.

Wesley bounced right back and soon found themselves inside the Roscrea 22 where good footwork by the Wesley out-half left him 1 on 1 with the Roscrea full back who couldn’t make the tackle and Wesley got in for the try which was converted by the try-scorer.

The Roscrea kick off didn’t go 10 and Wesley got the scrum. Wesley attacked again and nearly got in only to be held up. The Wesley out-half struck again when he crossed the line for a second time after finding a gap in the Roscrea defence off the 5 metre scrum. He converted.

Roscrea out-half Tim Foley put winger Joe Murphy through a gap who made good ground before being tackled. Soon after, Tim Carroll counter-attacked well from a kick by running the pitch and passed it to second row Peter Ennis who made it over the line. The conversion inched wide.

Tim Foley made another break and offloaded it well to Alan Tynan who passed it to Mattie Keane allowing him to touch down just before half time. The conversion didn’t find its target.

Tim Foley opened the scoring in the second half with a penalty. Roscrea kept attacking and Tim Foley stepped inside and went in for the try but he couldn’t convert. Roscrea nearly scored again after Roscrea no.8 Peter Gavin kicked a loose ball downfield but the Wesley College full back beat him to the ball and touched it down for a 22 dropout.

Wesley attacked relentlessly with breaks by their 13 and 15 and won two penalties where they both opted for touch. After winning a lineout in the Roscrea 22, Wesley got a maul going and their no.8 went over for the try in the final play of the game. The Wesley out-half had the kick to tie it up but couldn’t convert and Roscrea got away with the win.

Well done to Fergal Hayes, Transition Year Student from Cistercian College for sending in his report of the match.