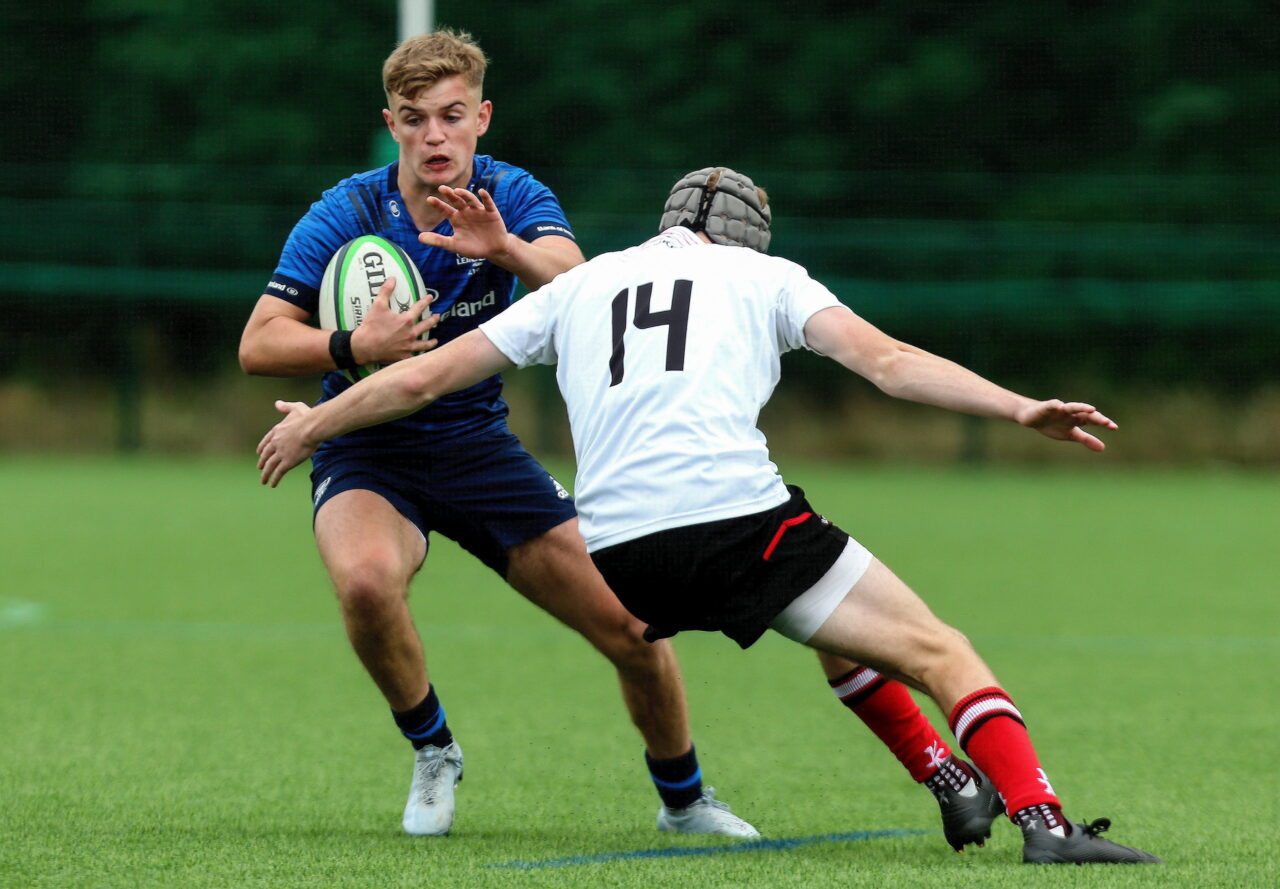 Ulster Rugby hosted Leinster Rugby’s U-19, U-18 Clubs and U-18 Schools team at Newforge on Saturday, 4 September.

Three excellent games of age grade rugby took place in front of a well-controlled crowd of spectators all of whom seemed to enjoy the games.

It was a profitable outing for the Leinster teams all of whom recorded hard-earned, but well-deserved, victories.

First up were the U-19 teams who played out a close encounter from which the Leinster team emerged as 22-15 winners.

Diarmuid Mangan opened the Leinster account with an unconverted try, five minutes into the game, to give his team a 5-0 lead.

Twenty minutes later the Ulster team recorded their first points of the game when Jack Boal scrambled over for a try, converted by Ross McKay, to give them a 7-5 lead.

On the stroke of half-time, the impressive Leinster captain, Sam Prendergast, converted a penalty opportunity to see his team into an 8-7 lead at the break.

Early in the second half the Ulster team regained the lead when Ross McKay was successful with a penalty kick to see his side into a 10-8 lead.

The Leinster team responded with two quick tries midway through the half. James Doyle and Fintan Gunne ran in for the tries and Sam Prendergast was deadly accurate off the tee as Leinster edged 22-10 ahead.

The Ulster team fought back and got some reward for their endeavours when Rory Telfer finished off a flowing move with an unconverted try but it would not be enough.

Next up were the U-18 Club teams, both of whom were undefeated in the course of their interprovincial series. The winners of this game were in line to take the interprovincial title and it was the Leinster team that came away with the title having won the game by 28-8 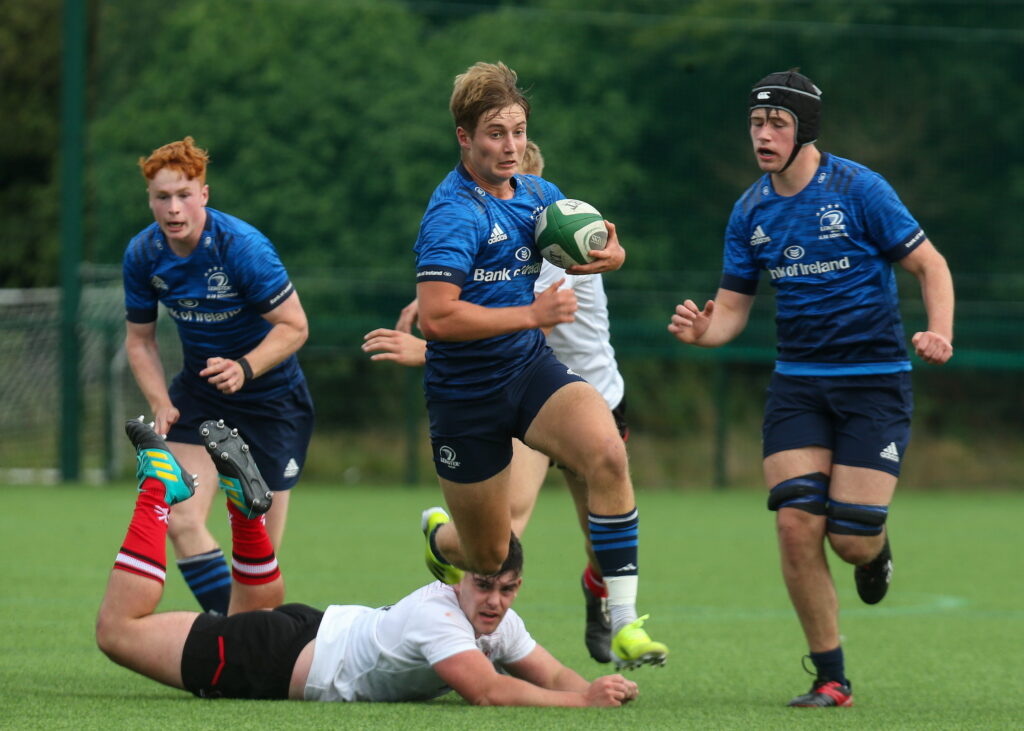 Twelve minutes into the game Charlie Sheridan touched down for a Leinster try, which was converted by Tom Larke, to see his team into a 7-3 lead.

This became 14-3, midway through the first half, when Niall O’Hanlon scored a try, which Senan Phelan converted.

The Leinster team held onto this lead, despite the best efforts of Ulster, until the interval.

Fifteen minutes into the second half, Nathan Hook touched down for an unconverted try for the Ulster team to reduce the arrears to 8-14. They might have increased their score at this stage only for final passes to let them down at crucial times.

It was the Leinster team that finished strongly with tries from Senan Phelan and Tom Larke. Larke was also successful with both conversions which secured the 28-8 victory for Leinster and, with it, the interprovincial title.

At the post-match ceremony the trophy was presented to James O’Loughlin, the Leinster U-18 Clubs captain, by Robert Deacon, Chairman of the IRFU Youth Committee, who congratulated both teams on their performances in the course of the game. 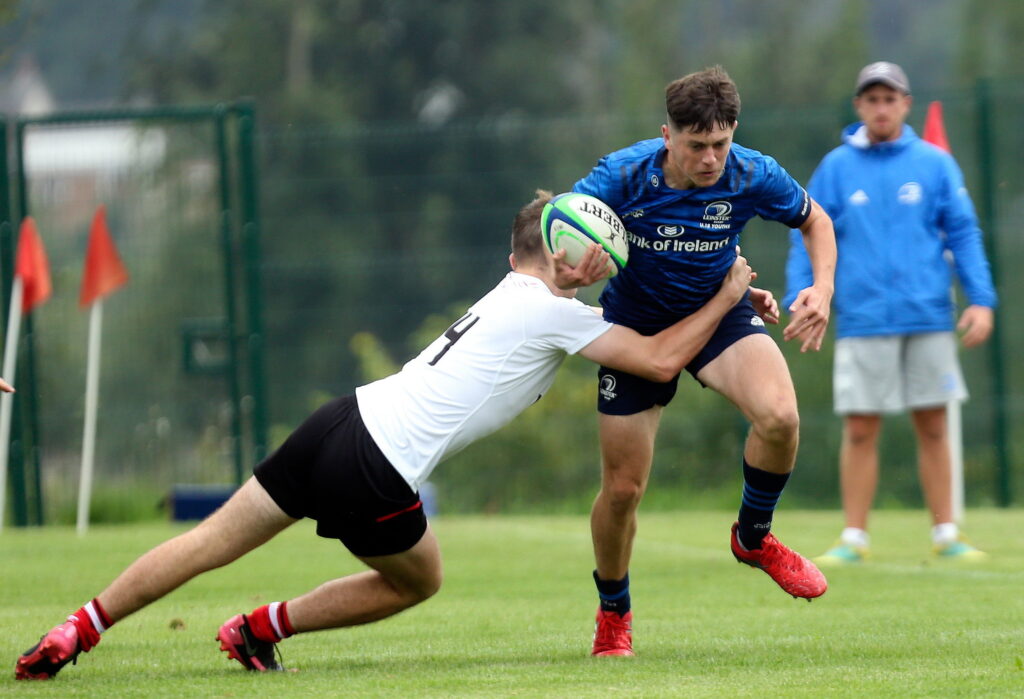 Once again it was the Leinster team which came out on top, this time winning the game by 45-12.

Leinster dominated the first half when they ran in first half tries to take a 31-0 lead into the break.

Hugo McLaughlin, Reuben Moloney and Inigo Cruise O’Brien each touched down for one try while the impressive Jules Fenelon scored twice. Three of the tries were converted by Jack Murphy.

Ulster started the second half strongly but got little change out of a very determined Leinster defence.

Midway through the second period of play, Leinster increased their lead to 38-0 when Alex Mullan touched down for a try which Jack Murphy converted.

Now it was the turn of Ulster to get onto the scoreboard and they did so twice with Lucas Kenny running in for two quick tries. Tristan Ferguson added the extras to one of these tries to reduce the Ulster deficit to 12-38.

However, with the final play of the game Tadhg Brophy scored a Leinster try, which Jack Murphy converted to secure the 45-12 victory.