Clondalkin bares all for Mental Health… 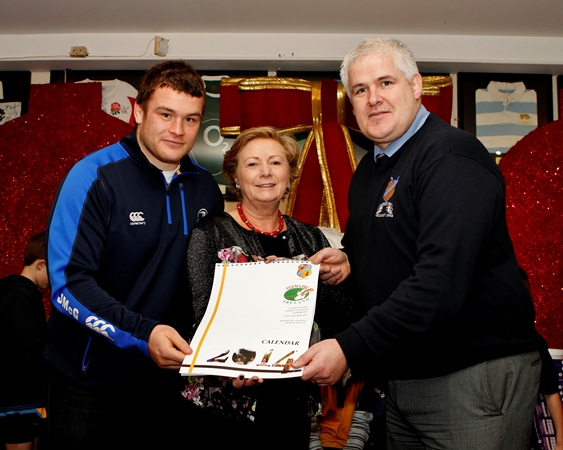 On the 20 December 2013, Minister for Children and Youth Affairs, Francis Fitzgerald together with Teen-Line Ambassador and Leinster & Ireland rugby player, Jack McGrath, launched Clondalkin Rugby Club’s 2014 calendar. The proceeds of this calendar will go to Teen-Line Ireland…

Players from the senior men’s and women’s teams have stripped off to create a 2014 calendar. Each calendar month recreates a different scene from popular movies including The Full Monty, Calendar Girls & Dirty Dancing. The calendar costs €;10 and is on sale in the Laurels Pub in Clondalkin Village. Orders for the calendars will also be taken at calendars@clondalkinrugby.com

Speaking at the launch, McGrath said “I am delighted to support Clondalkin RFC’s initiative to raise awareness for mental health among young people and funds for Teen-Line Ireland. It’s so important that teenagers know that there is somewhere they can turn to if they are in crisis or if they just need to talk,” he said.

Teen-Line Ireland provide a confidential free-phone listening support service for young people aged between 13 and 19 years, who may be feeling alone, worried or distressed. Teen-Line Ireland is open seven days a week from 8pm to 11pm with an extended service from 4pm to 11pm every Wednesday. The helpline is run by Teen-Line volunteers are ordinary, every-day people who understand that young people need to be heard, make no judgments and want to listen.

“Clondalkin Rugby Club is delighted to launch this calendar with the aims of raising funds for Teen-Line and promoting positive mental health. We look forward to developing a partnership with Teen-Line which will include hosting workshops for youth coaches from our Club and other Clubs across Leinster. In doing this, we hope to draw light on what are sensitive issues and make as many as possible aware that in crisis, help is only a phone call away” said Tom Duffy, Clondalkin Rugby Club President 2013-14.

“Teen-Line rely solely on fundraising activities and donations to keep the helpline open so we’re extremely grateful to Tom Duffy and Clondalkin Rugby Club for donating the proceeds of their 2014 calendar to us,” said Maureen Bolger, Founder of Teen-Line Ireland. “In the last 12 months we’ve has seen an increase of over 60% in the number of calls to the helpline. This shows the huge demand and need for our service and how important it is to keep it open and indeed expand the service,” she added.

For further information contact Clondalkin RFC PRO, David Shirley on 0872330747 or at info@clondalkinrugby.com

Teen-Line Ireland provide a confidential free-phone listening support service for young people aged between 13 and 19 years, who may be feeling alone, worried or distressed. Teen-Line Ireland is open seven days a week from 8pm to 11pm with an extended service from 4pm to 11pm every Wednesday. The helpline number is 1800 833 634 or 1800 teenei.
The help-lines are run by dedicated, highly trained volunteers. Teenagers can ring and speak to a volunteer, who will listen to them with empathy, respect and compassion. All volunteers are over 21 years of age and are fully trained in-house.

Since January 2013 Teen-Line has received approximately 11,000 calls, an increase of over 60% on 2012 indicating a huge demand and need for our service.

Teen-Line Ireland was founded by Maureen Bolger in 2006 following the death of her son, Darren who took his own life in 2003. Maureen wanted to provide a safe place for teenagers to talk.

Teen-line Ireland is a registered charity (CHY 16548) with all funding coming solely from donations and fundraising activities.