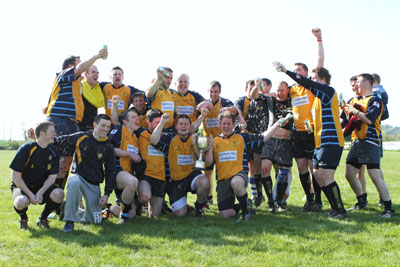 A new trophy cabinet will first up on the Clondalkin RFC AGM agenda after the Third team claimed further Clondalkin silverware, according to their President John ‘Sid’ Stapleton…

The third strings Speirs Cup victory made it two senior cup successes and a promotion this term for the Gordon Park side.

Clondalkin can also boast three unsuccessful under age final attempts this year and whilst President Stapleton was delighted with the continued success he bemoaned the size of a recently erected trophy cabinet.

“Again we have done brilliant this year as a club. A lot of teams have been successful and I am very proud to be Vice President and President in a season when we have collected so much silverware. I want to congratulate all involved.

“Finals for this club were very rare but we have had them in abundance of late. It is great but causes us one problem. We may have to take down the trophy cabinet we just put up last year and replace it with a bigger one.”