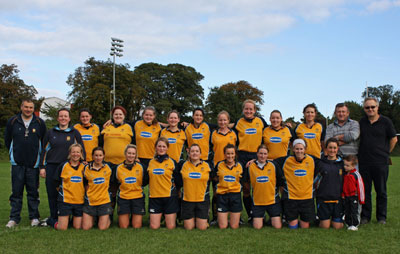 Within months of finishing their inaugural season the Gordon park ladies have set up a youth structure, can boast a Leinster representative in Rachel Vickers and amazingly have been promoted from the development league to Division 3.

It is a massive achievement for a fledgling team packed with players brand new to rugby, and if their Division 3 debut was anything to go by the Clonettes will continue to be a source of massive pride for the ever developing club.

Despite the mid season league upgrade, having to compete in the scrum for the first time and fielding three debutants Clondalkin held their own against a strong Wexford side last weekend.

Unfortunately they couldn’t register a dream victory despite two scores from the prolific Sarah Phelan, who is astonishingly closing in on the 20 try mark with only five games of rugby under her belt, but gave a performance that delighted captain Sandra Flood.

“I am very pleased with our team, it is a huge step from Division 4 to Division 3, but we intend to learn from each game and improve our performances,” Flood told Clondalkin Rugby TV this week. “We have great talent on our team and we have every level of experience, so even though we have work to do, i believe we will see the results very soon.”