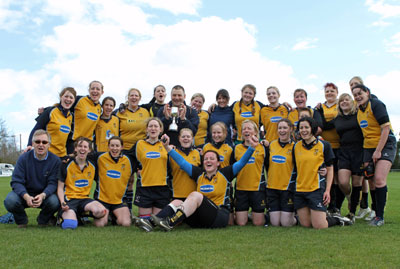 The fact the fledging side achieved such success in just their second ever season makes the result even more impressive.

Out half Therese Grogan grabbed the headlines with a 10 point personal haul, but in truth the win was borne more from will than skill as the Clonettes defended if their lives depended on it in the latter stages.

Clon were literally camped on their line in the dying minutes, but installed and impressive defensive wall, which, despite a number of last ditch Edenderry advances, couldn’t be breached.

As a result Sandra Flood lifted a fourth cup in two seasons for a club that is fast becoming silverware-polishing experts.

“This is a historic day for the club,” Club President John ‘Sid’ Stapleton, told CRTV. “The whole club are extremely proud of the ladies.

“They should be proud of themselves. The made history on Saturday and won the first silverware for Clondalkin this year. They have really added a lot to our growing club and we want to thank them. I think the team would join me in thanking Marty O’Brien, Gordon Clondel, Eugene Noble and Ciaran Phelan for the work they have done with the Ladies over the last two years.”