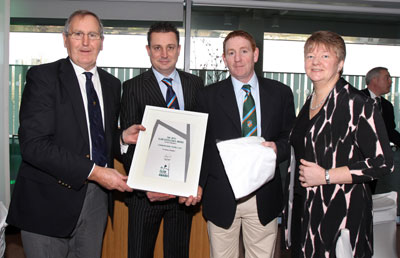 The Gordon Park based club won the ward for having exemplary standards and systems in place both on and off the playing field.

Such an award, which was presented to Club President John ’Sid’ Stapleton on behalf of the IRFU at the recent Ireland versus France game, marks the achievements of those off the playing field and is reward for the dedication and efforts of those in administration and committee roles.

“I have said recently that I have been at more finals and seen more trophies come into the club over the last two years than I have in the last 30. That success is possible not just because of the players, but the as a result of the work done behind the scenes.

“It is great to get recognition for that off the field work,” President Sid Stapleton told CRFC TV.

“The award comes thanks to a lot of hard work by all those involved in the club across all areas from senior to youths and from finance to child welfare. The award will assure all members, parents, players, sponsors and external bodies that CRFC is a well run club operating to highest standards providing a quality service under a controlled environment.

“In achieving this award the club would like to recognise the efforts of Barry Connell, Alan Bracken and Tom Duffy, and also the assistance of Leinster Rugby and in particular Niall Neville. It bodes well for the future of Clondalkin RFC when such high standards are in place.”