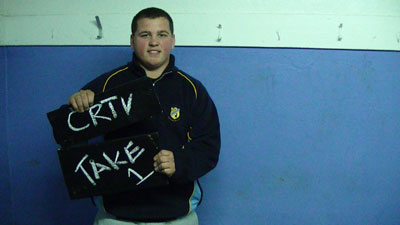 Shouts of cut, action and keep rolling have taken on an off field significance in Gordon Park of late as Clondalkin Rugby Club have become the first junior rugby side in the world to launch their own TV station…

The Club, whose collective promotional achievements were rewarded when their PRO won the 2009/10 Leinster Evening Herald PRO of the year award, have taken self promotion and public relations to another level by starting Clondalkin Rugby TV this week.

The new station, which is accessible on www.clondalkinrugby.com, was launched in the club house with the showing of ‘Final Fantasy 3’ a Hips-notic Production’s documentary, which includes a exclusive interview with Naas fan Jamie Heaslip and is based last season’s historical cup winning final week.

Clondalkin Rugby TV will air previews, reviews and lots more and is the perfect way for the clubs supporters near and far to stay up to date with Clondalkin Rugby Club proceedings.

“We have experienced massive growth on the pitch in Clondalkin Rugby Club over the last few years, but have made impressive strides off it too. In Jonny Stapleton we have an experienced journalist and the best PRO in Leinster if not Irish and World rugby. He gets great help from Derek Murtagh and the pair have been brilliant.

“This is a new way to Clondalkin TV will air previews, reviews and lots more and is the perfect way for the clubs supporters to stay up to date with Clondalkin Rugby Club proceedings. This a new way to promote ourselves, rugby and Clondalkin as an area and it’s another positive feather in our every growing cap,” Club captain Dan Fitzpatrick explained.