Clondalkin to grace Division 1 for the first time… 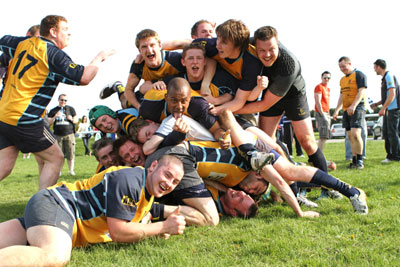 Clondalkin Rugby gained promotion to the Leinster League Division 1 for the first time last Sunday, but Club Captain ‘Big’ Dan Fitzpatrick claims it was the months and even years prior that were the most significant days in the club’s history…

Victory over Portarlington in Athy on Sunday sees Clon move just two promotions shy of Senior rugby, but lock Fitzpatrick believes the work and effort put in over the last few years that were the catalyst to the historic win.

Fitzpatrick, who took time to pay tribute to departing coach Kenny O’Brien, claims the effort put into developing and progressing the club at every level has inspired the first team to be so successful.

Promotion is a case of mission complete for the Air Corp man and the Club’s first ever captain to serve consecutive terms will step down now and let the younger generation progress the club further.

“This is a massive win for all involved in Clondalkin Rugby Club and this win is for the committee, all the players from firsts to Under-8s and all the members of the big Clondalkin family. We are now a forced to be reckoned with in Leinster Rugby and will be playing at a level these players deserve,” Fitzpatrick told CRTV after the bout.

“I am so proud and ecstatic today. It was a massive performance against a quality side today, but we have been working toward this point for two years. We started the season early got fit and put in three training sessions a week and changed a few off field things. That is were this promotions was born from.

“This is a young side and they can go on and hopefully push on further. Special mention must go to Kenny O’Brien, who steps down today. He guided a lot of these players to the All Ireland Under-18 final years ago and now with his involvement they have given the club another historic day.”

Club President John ‘Sid’ Stapleton took time to thank Fitzpatrick for his efforts as well as paying tribute to the players.

“The two years Dan has been captain we have broke a lot of records. We have won three cups last year and are fielding five senior teams. Now we have promotion and I know that all of the committee want to thank him and the players who have been magnificent and are a real inspiration to the underage kids we have here.

“Coaches Kenny O’Brien and Paul Haycock also get our thanks. We are looking forward to travelling to new places next year and further promoting Clondalkin around Leinster. It is a huge honour for me to be President today and to be part of a unique club that is Clondalkin.”