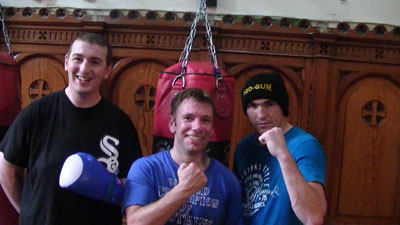 The season may yet to have drop off for Clondalkin Rugby Club, but they have been landing big hits in abundance over the summer months…

Whilst other clubs pre season regime most certainly included crashing into tackle bags Clondalkin have been hitting bags of a different kind.

Players from the Gordon Park based club have been trying to ensure they can punch above their weight in their inaugural Division 1 campaign by training with one of Dublin’s best boxers.

Some Clondalkin players temporarily traded the boots for gloves and the pitch for the ring as they went through physical hell in Chappell transformed into a gym on Camden Street.

“We tried to spice things up in pre season. We wanted to motivate all five senior teams to get as fit as possible and the boxing classes were gruelling but great. Everyone that attended would just like to thank Anto Fitzgerald and Steve Dawson. We might have cursed them during the sessions but any of the lads that attended their classes are really benefiting,” Captain Kevin ’The Polar Bear” Cullen explained.

“Even Poonsawat, the Thai fighter that beat Bernard Dunne, urged Dunne to join our club. We hope we start to make as big an impact as those lads and that we get the support from the community in what is our biggest ever season.”