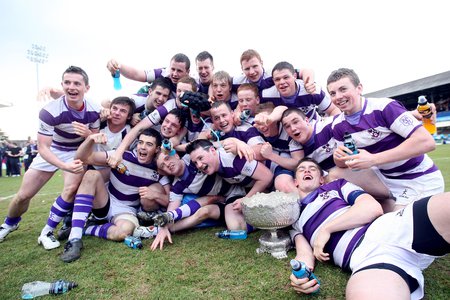 The Kildare based side were dominant from the off and early tries from scrum-half Conor McQuaid, converted by wing Conor Mahony, after 7 minutes.

Mahony’s penalty on the stroke of half time made it 24-0 and a heavy defeat looked on the cards, but credit to Roscrea who never gave in and playing their first final since 1999 were rewarded with out-half Bill Duggan’s penalty a minute into the second half.

With their talismanic leader Conor Finn continuing his fine run of form Cistercian looked to gain some more momentum but underage cricketer Jordan Coghlan’s powerful try on 40 minutes made it 31-3 as the consistent Mahony added the extras and Mahony then added his own try on 44 minutes.

Eventually Roscrea’s pressure told and second row Rory Moloney launched a stinging burst which led to his side’s first try of the overcast day. Duggan added the points to make it 36-10, but a late try from Quirke (58), converted by Mahony who would add a 64th minute penalty, sealed the win.

Substitute Jack O’Driscoll’s late try gave some consolation to Roscrea, but it was too little too late and Clongowes were deserving winners on an impressive display.