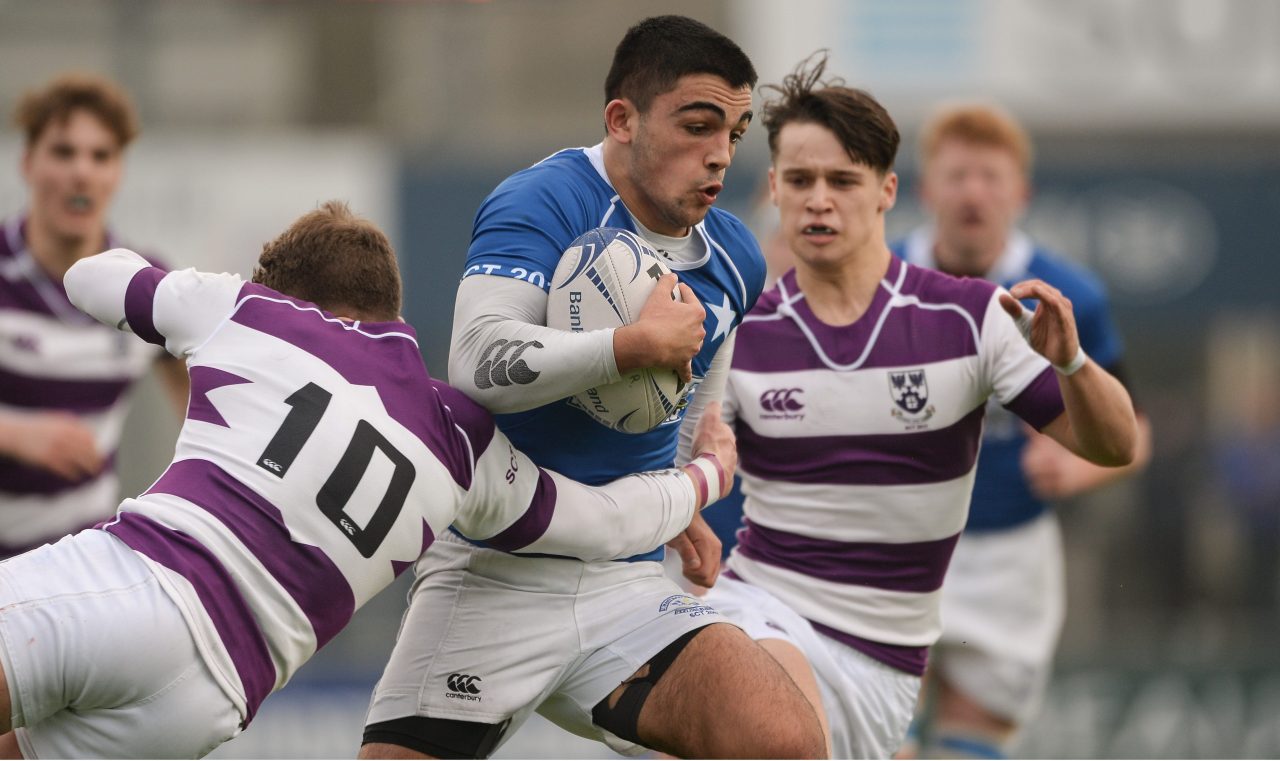 Clongowes showed no less than five changes to their pack from the first round and one at scrum-half where Joseph Murphy came in for Conrad Daly.

St Mary’s flanker Harry McSweeney set the tone with a spectacular take from the kick-off.

Their out-half Tom Murray launched a long ball forward to put full-back Jack Gilheany in a spot of bother.

Clongowes failed to clear the danger and conceded a penalty in the process for wing Ruairi Shields to miss from the right.

A high tackle by Sean Heeran on scrum-half Murphy handed the Clane school position for flanker David Jeffares to sneak over from short range. Centre Ben O’Shea converted for 7-0 in the eighth minute.

Flanker McSweeney was onto the restart again and St Mary’s drove hard until wing Shields was bottled up in midfield.

The next time the Rathmines nursery made an incision through centre Craig Kennedy. It caused Clongowes captain Sean McCrohan to play a man without the ball, sanctioned by a yellow card.

St Mary’s had seven minutes to make good on their one-man advantage. They couldn’t do it.

The number of mistakes and penalties began to rise as the unkind weather made it more difficult to recycle clean ball.

Second row Matthew Martin pinched a lineout to trigger a move in which right wing Reinis Lemess had to be taken down by St Mary’s full-back Eamonn Byrne.

It took a superb in-to-out line by lock Martin and inside ball for McCrohan to almost make the line.

The ball was cleaned for out-half Thomas Monaghan to find O’Shea plunging for the second try before the centre’s conversion made it 14-0 in the 28th minute.

It was far from one-sided as St Mary’s Niall McEniff took off up the left and the Clongowes defence creaked when Murray couldn’t find McSweeney with a short ball.

When McEniff looked like a threat on his next carry, Monaghan wrestled the ball away.

This was their downfall. They got into position without getting over the line.

The second period began with Clongowes looking to add to their lead.

A sharp line by flanker Jeffares got it rolling, captain McCrohan twice involved in punching the ball up and Martin completing the job for O’Shea to add the extras.

It was a mountainous climb from there for St Mary’s.

42: TRY!@clongowes go 21-0 ahead thanks to a Matthew Martin try and O’Shea conversion. #LSSC https://t.co/vMxxCpb2zP

However, centre Myles Carey gave them life with a stunning individual try, stepping inside two defenders and accelerating to the line for Shields to make it 21-7 in the 46th minute.

44: TRY!@StMarysCSSp close the gap to 21-7 thanks to a wonderful try from Myles Carey! #LSSC https://t.co/QnZhLcT3BT

Then, wing replacement Alex Dix and full-back Byrne made serious gains to take St Mary’s to the brink.

They did what they couldn’t earlier by applying accuracy for Byrne to fly through a hole.

Shields converted to narrow the gap down to seven points in the 54th minute.

50: TRY@StMarysCSSp get to within a converted try of Clongowes thanks to Eamonn Byrne! Now 21-14! #LSSC https://t.co/Zeg7NOr97i

The purple and whites resorted to banging the ball long in what was a sign of nervous tension creeping in their game.

Even so, from one such ball lofted by scrum-half Murphy, they ensnared Shields, who failed to release in the tackle, for O’Shea to strike from the right for the safety net score.