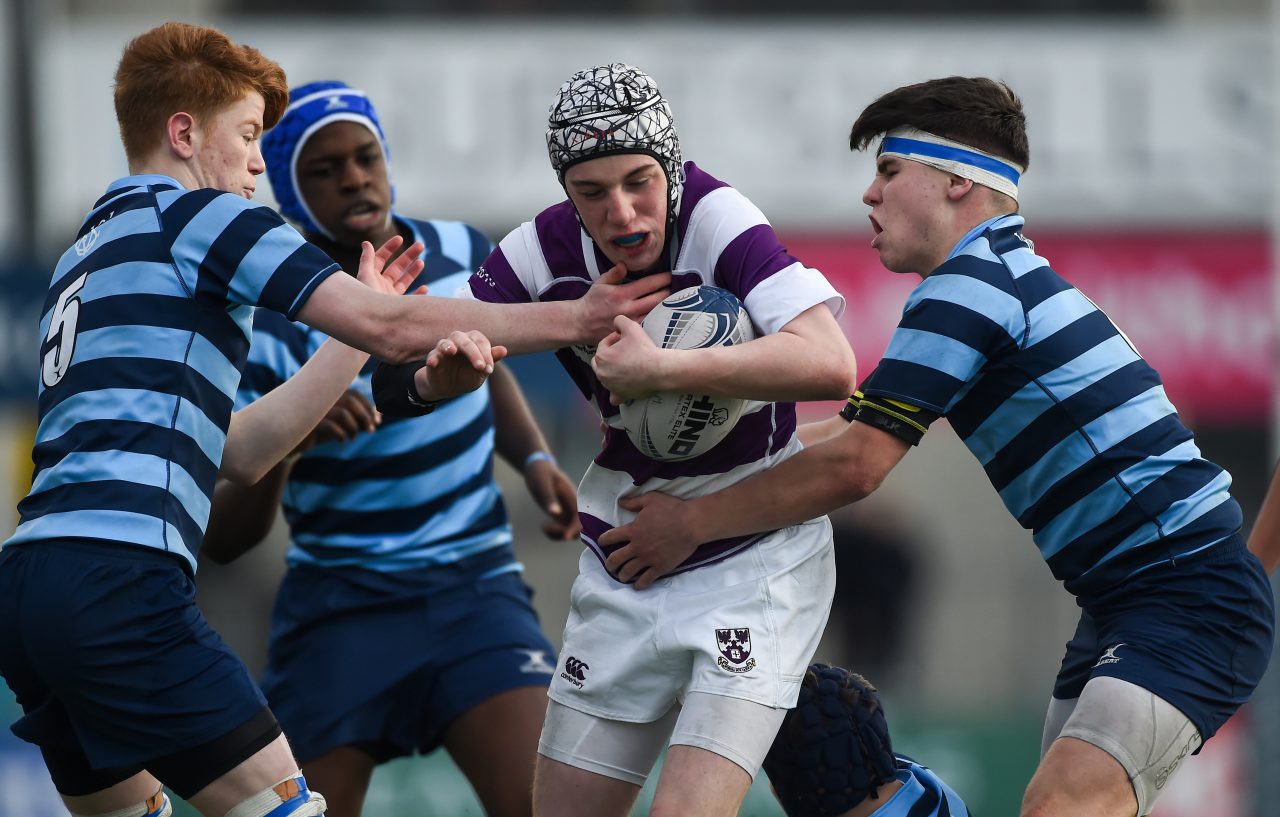 Clongowes Wood just about had enough in the tank to outlast Castleknock in a cracking Bank of Ireland Leinster Schools Junior Cup first round contest at Energia Park on Sunday afternoon.

The Clane school were on the front-foot straight away, hooker Leo Dowling finding a seam in the defence.

Castleknock unleashed their hard-driving forwards, like John Ozoani, Luke Brady and Gavin Murphy-O’Kane, the latter also proving a menace at the breakdown.

The Clongowes tendency to look for the offload was profitable through the middle.

They struck first when number eight Hugh Wilkinson’s footwork took them close and prop Flavio Macari shot through a hole from close range for McNamee to convert in the 13th minute.

They looked to turn the knife when left wing Senan Noone almost got away.

However, the direct carrying of ‘Knock hooker Adam Brereton-Hoare and Murphy-O’Kane put them within striking distance, only with no reward.

It was a theme that continued as Castleknock struggled to release their outside backs, wing Conor Watt twice thwarted down the left.

They eventually broke through from a tap penalty straight out of the 1980s Five Nations playbook.

The forwards shielding the ball, decoy runners taking off and flanker Brady taking it at full tilt to breach the defence for a smashing try, full-back Andrew Waldron conversion squaring it in the 26th minute.

This was partly undone when Wood took advantage of poor communication at the restart to make enough progress to force a penalty which McNamee just about made for 10-7 at the interval.

Unfortunately, Clongowes lost their captain Wilkinson early into the new half.

Castleknock’s Murphy-O’Kane twice made headway down the right, without giving the ball to unmarked wing Finn O’Connor.

A fine turnover by flanker Inigo Cruise-O’Brien put Clongowes in business. Liam Burke took them further forward where they were denied again at the breakdown.

Lock Diarmuid O’Brien and Macari cracked open Castleknock before the omnipresent Ozoani clamped down for yet another penalty at the ruck.

They just couldn’t clear their lines properly and lock James Ruddy made them pay with a drive to the line for 15-7 in the 48th minute.

Not to worry, prop Ozoani steamed onto the ball, carrying tacklers to the whitewash for Waldron to make it a one-point game in the 53rd minute.

They quickly lost Brady to the bin and McNamee slotted three points to give Clongowes the buffer they needed.