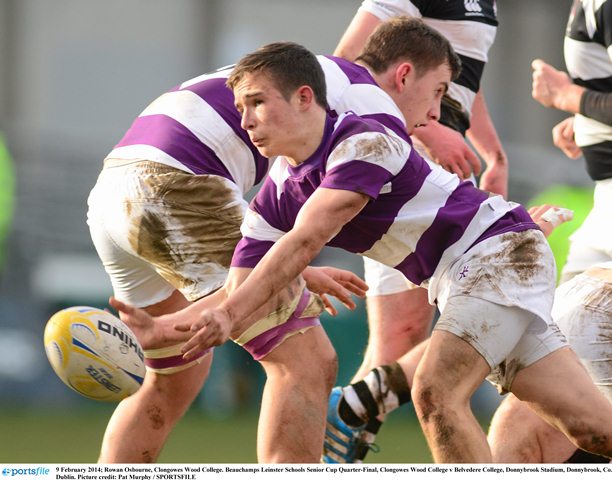 The Clane school is creeping surely up the ladder of winners of this prestigious competition, standing on a solid eight wins, the last coming in 2011, two behind Belvedere and Terenure, in joint-second on ten…

It would be over-the-top to suggest this Clongowes Wood squad are right up there. They are not at the standard of their last winners, one that played a brand of rugby that even surpassed that of Blackrock’s Dream Team.

The main arrows in their arsenal come in the backline where there is a big physical presence and boys that can break tackles at will. Their out-half Fergal Cleary was the Ireland U18 Schools inside centre last year. This is a reflection of his strength.

It doesn’t stop with Cleary, their left wing Cian O’Donoghue pouncing for a pair of tries in their 34-15 first round domination of Kilkenny on a day when polar bears would have been indoors.

The finishing credentials of three-quarters James Lappin, Cillian Burke and Leinster U18 Schools thirteen Colm Mulcahy are first-class and full-back Alan Hughes really caught the eye in the 26-14 quarter-final defeat of Belvedere. Give them the space and they will exploit it.

There is positive news for St Andrew’s in that coach Noel McNamara cannot call on a truly dominant pack of forwards. This is where they can be tied down.

There is still quality there with Leinster U19 hooker Johnny Molony and U18 Schools flanker Will Connors providing the skills to go with their all-round steel and technical nous.

Unfortunately, Clongowes number eight Mark Jones is struggling with the injury that kept him out of the quarter-final and they could stay with Stephen McVeigh, a different type of equally effective eight.
This is not likely to diminish Clongowes as they have strength in depth, especially in the front row where they have a quartet of quality props.

All season, St Andrew’s have shown special qualities as a committed group of young men, who share an unbreakable bond. It is their spirit of unity as much as anything else that has taken them this far.

That is not to under-estimate them. There is quality there too. Leinster U18 Schools second row/number eight Greg Jones is a forceful character and U19 Interprovincial prop Andrew Porter lays down the law in the front row.

They have shown discipline and commitment in giving up nothing easy. They took Castleknock to a 15-all draw in the first-round. It was seen as the underdogs best chance at an upset.

That was to reckon without their reaction. It only confirmed to them that they were good enough. They proceeded to shut down the ‘Knock attack in the replay hitting back with the only try of the match from flanker Johnny Guy in the 13-9 win.

This could have been a turning point for them, in terms of building metal strength and resilience in the face of intense pressure.

They had learned a stinging lesson from their Leinster League semi-final loss to eventual champions Newbridge, letting go of a 13-0 lead to be on the receiving end of 17 unanswered points from the Kildare boys.

Back to the Cup, next up was Gonzaga in the quarter-final. This was expected to go to the wire. Instead, the Booterstown school blew away their opponents 47-3, showing a different side to their game. Their ruthless attitude to the ruck and fringe action was far too much for ‘Zaga.

It could have just been one of those days when everything clicked into place. Or, maybe, the culmination of all their hard work is finding favour with the players.

Whatever the reason, St Andrew’s put on display an exhibition of total rugby that produced seven tries, their resolute defence conceding none.

It is the template they must bring to topple Clongowes, a merciless breakdown game, brute force in contact and the killer touches of Jack Balbirnie, the younger brother to Middlesex cricketer Andrew.

Out-half Balbirnie is blessed with an array of skills that can test the best defences and he has a kicking game to go with it, nailing 16 of his last 17 shots at goal.

They will need everything to go their way to unsettle and undo Clongowes. Even then, it may not be enough.

This match will be played in Donnybrook at 4pm today.