Clontarf back to their best… 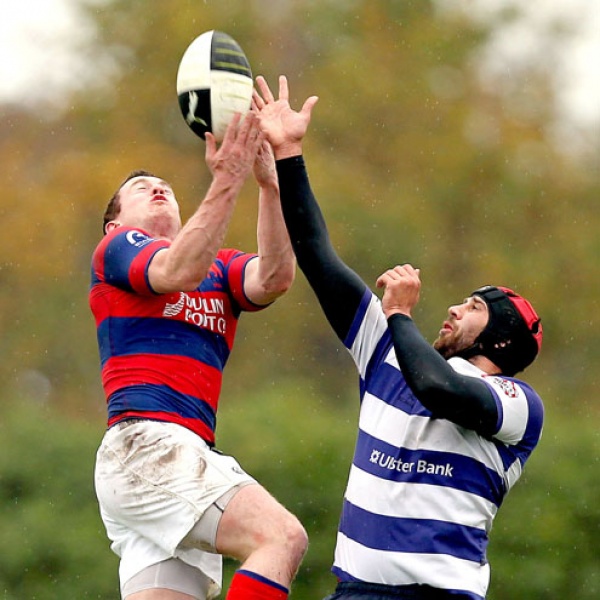 The wet conditions, at times, marred this from being an exciting and fluent contest with both sides enjoying periods of dominance in a tight first half.

Clontarf’s tactics were effective too. Evan Ryan demanded quick ball that was transferred through the middle where Killian Lett and Barry O’Mahony probed the lines with some threatening carries. It didn’t take long for them to get the scoreboard ticking either, as Richie Lane kicked a penalty after two minutes.

Blackrock out half Darragh Fitzpatrick levelled proceedings on nine minutes, before Lane posted two further penalties to put Clontarf 9-3 ahead. The key score was Lane’s second penalty. It was a sweeping five phase move, with O’Mahony, Aaron Dundon and Timmy McCoy all featuring prominently in the lead up.

The only try scoring opportunity came just before the break with a swift move off a ’Rock lineout, which led to Arthur Lyons paving the way for Des Dillon but the burly second row lost possession metres from the line. It was these stream of errors that prevented the home side from building up the required attacking platform to threaten the Clontarf line.

Tactically not much changed after the restart, and it was quite a dour period up to 60 minutes with ’Tarf continuing to look in command. It took nearly 46minutes (between the 18th and 64th minute) for a score as Lane converted a penalty from inside the 10metre line. Back came Blackrock, and Rob Keogh made the initial surge which led to Fitzpatrick tapping over a penalty to reduce the deficit to six (6-12).

Lane struck another penalty from a similar position to put Clontarf further ahead. The away side were visibly growing in confidence at this stage, with Blackrock appearing to wilt as Rob Keogh and Fitzpatrick missed further penalties.

Blackrock’s commitment and courage to this contest cannot be doubted but they couldn’t spread the ball out wide where Jan Simon Byrne and Dave Rowan showed glimpses of their pace and power. Their only source of go forward ball was through the middle, but a huge defensive effort from Clontarf denied the ’Rock pack the crucial opportunities.

In contrast, the away side took their opportunities and with five minutes remaining came the defining moment. Barry O’Mahony fielded Aaron Dundon’s lineout at the back and broke from the 10metre line, sprinting unopposed to the corner for a superb opening try. Lane hit the post from the conversion. Clontarf monopolised position and possession from thereon in.

It wasn’t over yet though, and a scrum on the 20metre line saw Adrian D’Arcy break clear to send in sub Diarmuid O’Meara from close range to make it 25-6. Clontarf completed a fine second half performance as Daragh O’Shea capitalised on a loose ball to race home from his own half for the third try to put a gloss on the scoreboard, which by no means reflected the endeavours of the defeated team.

For further results from the AIL visit https://www.leinsterrugby.ie/domestic/home.php