Clontarf rugby on the rise… 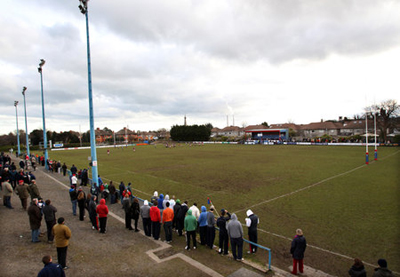 This time last year, Dublin’s premier club were facing relegation from Division 1a and the only prospect of silverware was a J2 league title secured by the heroes of yesteryear. A dark cloud descended on Castle Avenue and looked like it was there to stay.

After becoming accustomed to challenging for honours in the top flight, Tarf faced the challenge of rebuilding the confidence of a team and a club that had lost its way. Bernard Jackman, retired from the professional ranks, took over the role as head coach in a full time capacity, Ben Gissing returned to the club where he made his name and a host of new faces were drafted in to bolster the playing ranks. Eleven months on and the old swagger has returned, a new air of optimism is apparent as the Club’s fortunes have been transformed.

Clontarf have secured a return to the top flight with two games to play and have also booked their place in the Division 1 play-offs. The Club’s second string lost out to St. Mary’s in a winner-takes-all finale after an impressive campaign in the J1 League. Clontarf’s J2 side have a second consecutive league title in their sights and the J4s are on the brink of claiming their league.

The Under-21s won the Leinster league title and now enter the All-Ireland competition while the Under-19’s also won their league. There are now over 300 youngsters learning their trade in the youth and mini’s section of the club.

The 2010/11 season is shaping up to be one of the most successful in the 135 year history of Clontarf Rugby Football Club.