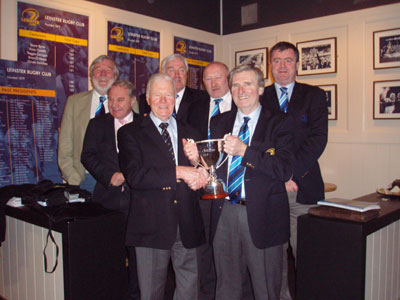 This cup pays testament to the esteem that Ray is held by everyone in Leinster Junior rugby. The Cup was presented to Niall Rynne (Chair of the Competitions Committee) by the five Area Chairmen; John Power (Metro), Pat Fitzgerald (Midlands), Victor Hendy (North Midlands), Douglas Lett (South East) and Don Byrne (North East).

Ray has served junior rugby for many many years, firstly through the Garda R.F.C. where he played his rugby, officiated as a referee and as a very able administrator. Ray has held the high office of President and still oversees much of the club activities.

Ray has contributed to the Leinster Branch over the last 30 years, as a representative of the A.R.L.B. and through his stewardship of junior rugby in the province, he was a very welcome presence in the many clubs he visited as Junior Honorary Secretary.

In the early years Ray loved presiding over the Provincial Towns Cup Finals and assisting the host clubs in staging the happy occasion they provided. Ray is by location a Metro man and has served the Metro Junior Committee over the past 30 years plus, as a valued officer.

He has brought much to Junior rugby and this cup is special to him, in that he was one of the main architects of the Leinster League in the early 1990s.

Ray always felt there was a need to allow a club the opportunity to progress – a pathway to Senior status.

All in Leinster Rugby; be it administrator, Seniors or Juniors wish Ray well and thank him.

Would it not be fitting that in the year it is first to be presented, that Ray is likely to be presenting it to Garda R.F.C. on their pathway to Leinster League 1A?