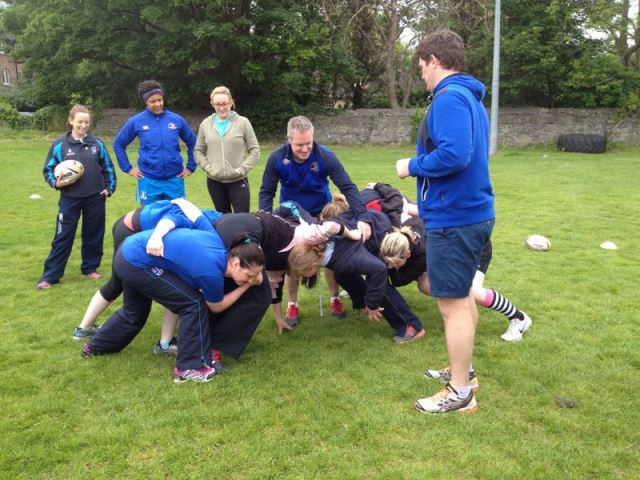 The course was run over two full days by Leinster Rugby for Women only, to facilitate and encourage more females to become Rugby Coaches…

The IRFU Foundation Level course is for coaches of players aged 13-18, in this case it was primarily girls who are going to be coached by the participants on the course, although the qualification will allow them to coach boys or girls if they wish.  The participants came from a variety of clubs in Leinster, several from Old Belvedere’s ever increasing women’s section, and several also from Clondalkin RFC. Both clubs are keen to introduce new teams for teenage girls in the coming season, to aid and support the future of their existing Womens Teams. Athy, Barnhall, Westmanstown and Boyne also had women attending the course to assist with coaching their already growing girls teams next season.

Although being a Rugby player is not a requirement for attending a coaching course, we were fortunate to have Marie-Louise Reilly, Nora Stapleton, and Sophie Spence, all experienced Irish International players included in the 16 participants. All 3 women, currently in preparation for the Womens World Cup later this summer attended the course with a view to visiting Clubs in Leinster with Girls teams and coaching guest sessions, whilst meeting the keen young female players to whom they are such fabulous role models.

The course which includes technical and tactical Rugby modules, as well as more generic information such as ‘The Role of the Coach’ was concluded with an Affiliate Referee course on Sunday afternoon, which all 16 participants completed, so not only will more women be involved in coaching Rugby moving forward but hopefully we shall see a few more Refereeing our game also in future.

If you would like to become more involved in Womens Rugby, whether it be though Coaching, Refereeing, Managing or assisting in Womens or Girls Rugby in any other way please contact,
Jennie Bagnall, Leinster Womens Development Officer – email jennie.bagnall@leinsterrugby.ie.