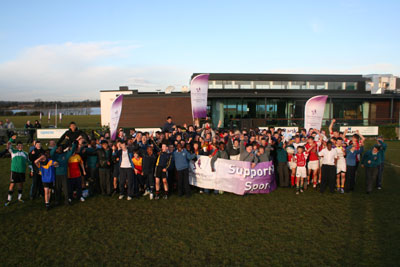 Recently launched Tag’em has now gone from strength to strength with numbers increasing every week generating experienced and welcoming new players to tag rugby. Tag’em is a tag rugby “drop in” facility run by Leinster Rugby in partnership with Dun Laoghaire/Rathdown County Council throughout the year.

The facility also provides an opportunity to welcome new players and increase awareness of domestic rugby. Tag’em facilities are available across the council in a number of venues, at Loughlinstown Leisure Centre and Meadowbrook Leisure Centre. For further information contact Stephen Gore, 086-6087943 or stephen.gore@leinsterrugby.ie

In Fingal County a large number of 196 boys from eight schools competed in what all present hopes to become a more regular fixture for 1st and 2nd year boys. The schools are all either Development Cup level or striving to get to that level.

All the teams played three matches and the day was concluded with an all captains match versus the rest.

This match was played on a full pitch for all the players to experience 7’s rugby at its best and was truly enjoyed by all players and spectators.

Malahide RFC put on refreshments for all present and a special thank you goes to them for not only the wonderful facilities but helping to make the first of its kind seven-a-side blitz a massive success.

The day was made an even bigger success by the quality of the refereeing, special thank you to all the Club Community Rugby Officers that helped on the day.

Micheal O’Leary, Principal Ardgillan College, said: “Our students thoroughly enjoyed themselves and were in great spirits when they returned.”

Jeremy Kerr, Teacher and Coach, Hartstown CS added; “They all experienced the many joys of rugby in a positive learning environment, your team of referees were superb, as was the hospitality laid on by Malahide RFC.”

We are planning our next blitz for 1st and 2nd year boys and should your school like to compete please contact Christian Stemmet, Leinster Community Rugby Officer for Fingal County on christian.stemmet@leinsterrugby.ie or mobile 087-9118642.