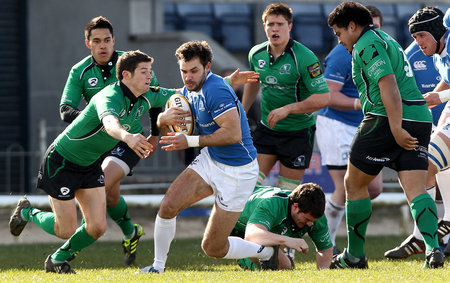 A youthful Leinster ‘A’ battled hard but lost 21-17 to an experienced Connacht ‘A’ in Friday’s interprovincial friendly in the Sportsground, Galway…

The hosts took the lead on 9 minutes when winger Darragh Fanning crossed over under the posts. Miah Nikora added the two points with ease and on 25 minutes Shane Monahan crossed over for the game’s second try.

Nikora added a difficult touchline conversion to stretch the home side’s lead to 14 points. Leinster struck back on 30 minutes through the boot of Ian Madigan and the teams went in at half-time with Connacht 14-3 in the lead.

On 45 minutes  Shane Monahan picked the ball from the base of a ruck and dived over for his second try with centre Aidan Wynne adding the extras. Both sides started to ring the changes in the second half and Leinster started to get more and more possession.