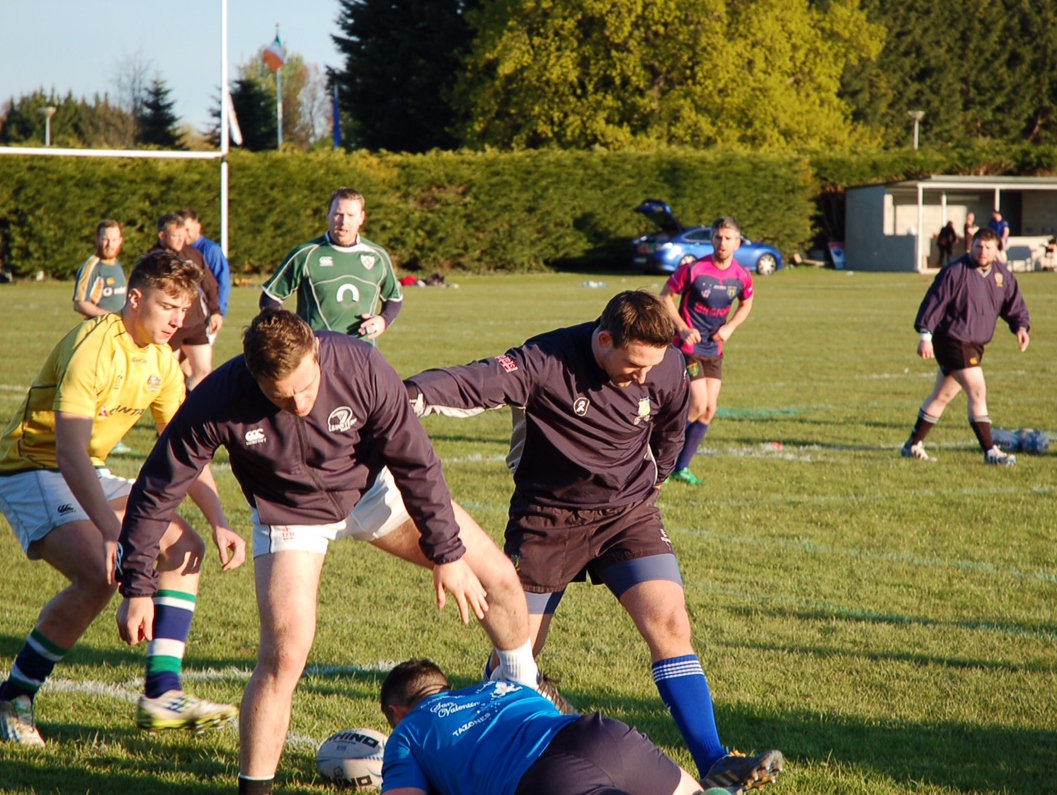 Any Leinster aspirations of holding on to the All-Ireland Junior Inter Provincial title were washed away in Westmanstown RFC by a Connacht side that coped better with the horrendous playing condition to win out on a score of 6-10.

Connacht managed to make more capital from less opportunities in a hard fought and competitive contest.  Their struggle against the elements in the first half saw them six points down at the break, but some clever use of the boot in the second forty secured the win for the Westerners.

Despite dominating the scrum for over 60 minutes and having a slight edge at the lineout Leinster could not bring the advantage to bare on the scoreboard.  The home side’s line break stats were also superior, but Connacht will be happy to have edged them in the only numbers that matter.

This was not a day for swaggering rugby. The rain fell in a torrent throughout the game and a Baltic wind made handling, distribution and kicking a chore.

The opening twenty was all Leinster as they repeatedly pinned the visitors back into their 22.However line breaks by centers Williams and South came to nothing as the conditions stymied any momentum.

With six minutes gone ref Frank Murphy penalised the men in green for not releasing after the tackle and Ultan Murphy slotted over from 32 meters to leave it 3-0.  Two minutes later Connacht’s kicker, Shane Sweeny, got his shot at the sticks but had to watch as the wind blew it left of the posts.

Leinster had to deal with the loss of scrumhalf Mike Russell, called ashore after sustaining a knock.   On the 12 minute mark Murphy teed up his second penalty and belted over for his side’s second and final score of the game to leave it 6-0.  In the remainder of the opening period Sweeny got another kick at the posts, but again the wind played Puck with his effort.

Nine minutes into the second half Connacht full back Ian Heanue received a kick just outside his own 22.  He ran at a staggered Leinster defense, arcing around the line before putting on the gas.  His chip over the last man started a frantic foot race for the line, won by Monivea winger Coleman Maher who grounded for the games only try.  Sweeny’s conversion left it 6-7.

Straight from the restart the blues were inside the opponent’s five meter line, but the men from the west did enough to deflate the threat.  The host’s captain Ross Doyle, outstanding in attack and defense, then exited the fray with an ankle injury.

Connacht played containment and with 70 min elapsed the visitors got to pull further in front thanks to and an offside infringement.  Sweeney’s boot left it 10-6.

In the closing minutes Leinster looked as if they could execute a smash and grab.  A lovely fluid passing movement down the left side brought them inside the green 22, but an intercept returned play to the Leinster red zone.  Two turnovers later Connacht won possession and grinded down the Leinster ambitions as the clock ran out.

Leinster will look at the opportunities they had in this game try and reconcile it with the six points they had at the conclusion.  Despite showing bags of talent, plenty of hard work and commitment this squad have only two loosing bonus points from their two games.

Leinster have pride on the line as they take on an Ulster side that are two for two from their opening games in the final clash of the series.  Even with the advantage of playing at home in Ashbourne this will be the biggest test of the three games.