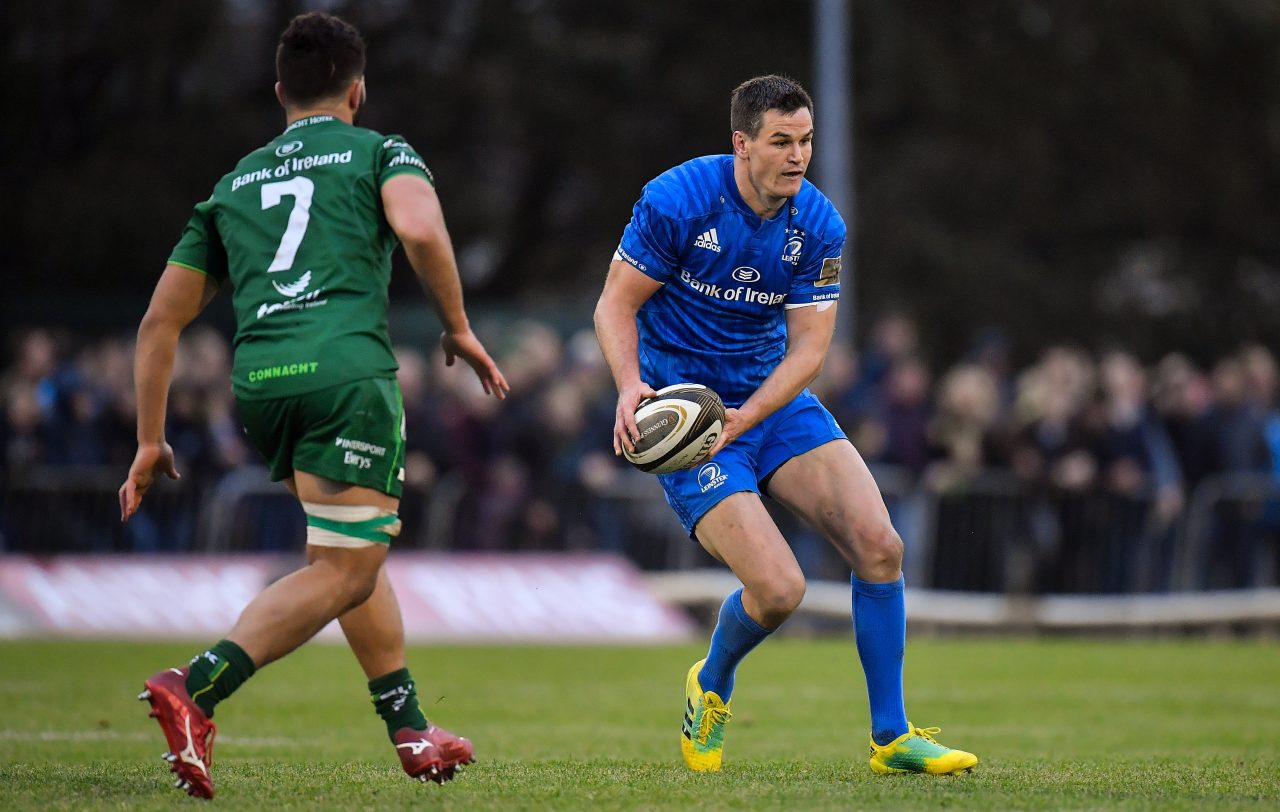 Connacht’s Sportsground stadium is a notoriously difficult venue for travelling teams and we’ve cast our eye over the last five occasions Leinster have made that journey.

From narrow one-point games to seven-try thrillers, Connacht v Leinster at The Sportsground is a fixture that never fails to entertain.

Second-half tries from Garry Ringrose and Seán Cronin were needed to pull away from Connacht in the most recent game at The Sportsground.

Leading 6-3 at the break after a bruising first half, Leinster seized control of the game within a minute of the restart thanks to a wonderful solo effort from Garry Ringrose.

With the pack dictating the game, Leinster were able to extend their lead when a 55th-minute maul saw Cronin barge his way over from close range. Johnny Sexton’s conversion opened a 17-point gap and, with Dominic Robertson-McCoy dismissed late on, Connacht were unable to claw their way back.

Aside from Caelan Doris making his first senior cap for the province, this was a day to forget for Leinster.

Connacht ran in seven tries on their way to a resounding win.

Although Leinster had already secured a home semi-final in the competition and went on to secure a fourth European title two weeks later, it was a defeat that will have disappointed head coach Leo Cullen.

First-half tries from Niyi Adeolokun, Tiernan O’Halloran and Kieran Marmion had Connacht 21-3 ahead at the break.

Adeolokun pounced for his second just after the restart, followed by another for Marmion and tries from Bundee Aki and Caolin Blade.

Barry Daly intercepted a cross-field kick and finished from halfway in reply for his 12th of the campaign.

Despite first-half tries from Zane Kirchner, Adam Byrne and Rory O’Loughlin, Leinster led by the minimum at the break as Connacht responded with a Danie Poolman try and four Craig Ronaldson penalties.

The hosts were in front 10 minutes into the second half when Dave Heffernan dotted down.

However, Leinster upped the ante and Josh van der Flier’s venture into the Connacht 22 resulted in his back row partner Rhys Ruddock forcing his way across the whitewash.

Replacement winger Barry Daly put the seal on the victory when he hacked away a loose ball before winning the race after it, collecting and grounding for the fifth try. Ross Byrne converted before adding a subsequent penalty in the 76th-minute. 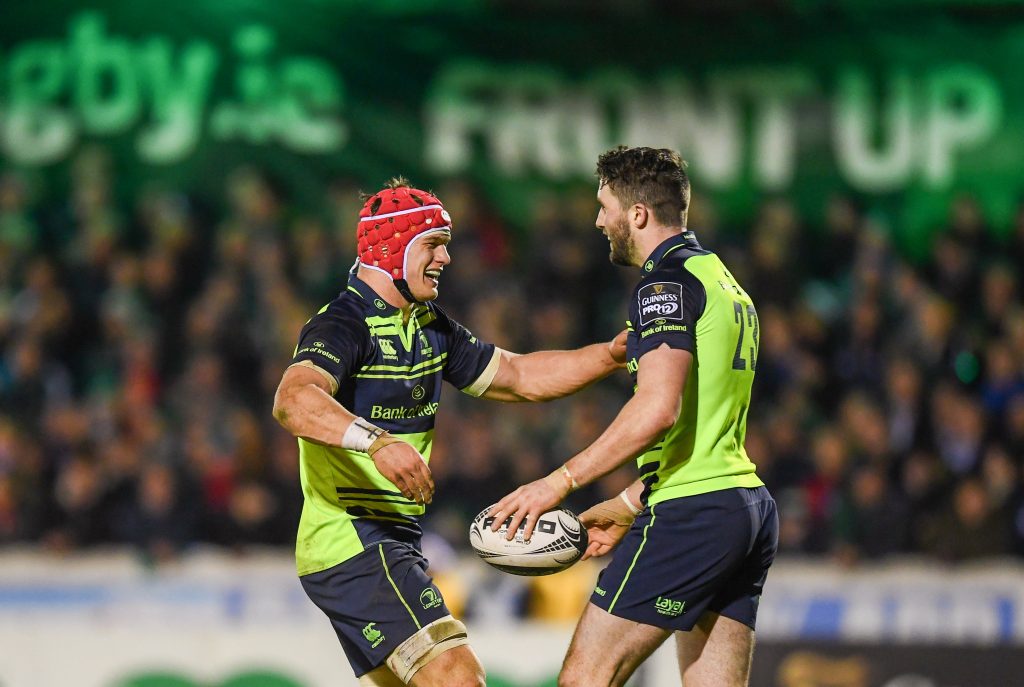 An arm wrestle between the top two teams in the Guinness PRO12 ended frantically as the boys in blue, or on this occasion white, battered Connacht’s line late on without reward.

Kieran Marmion’s 13th-minute try, converted by AJ McGinty, had Connacht leading 7-0 at the break thanks to the backing of a gale-force wind.

Ian Madigan opened Leinster’s account barely a minute into the second half and they unloaded their power-packed bench on the hour as Mike Ross, Devin Toner and Eoin Reddan entered the fray.

Madigan kicked Leinster to within a point with 17 minutes remaining and a dogged stand-off took place in the Connacht half for the majority of the remaining time. 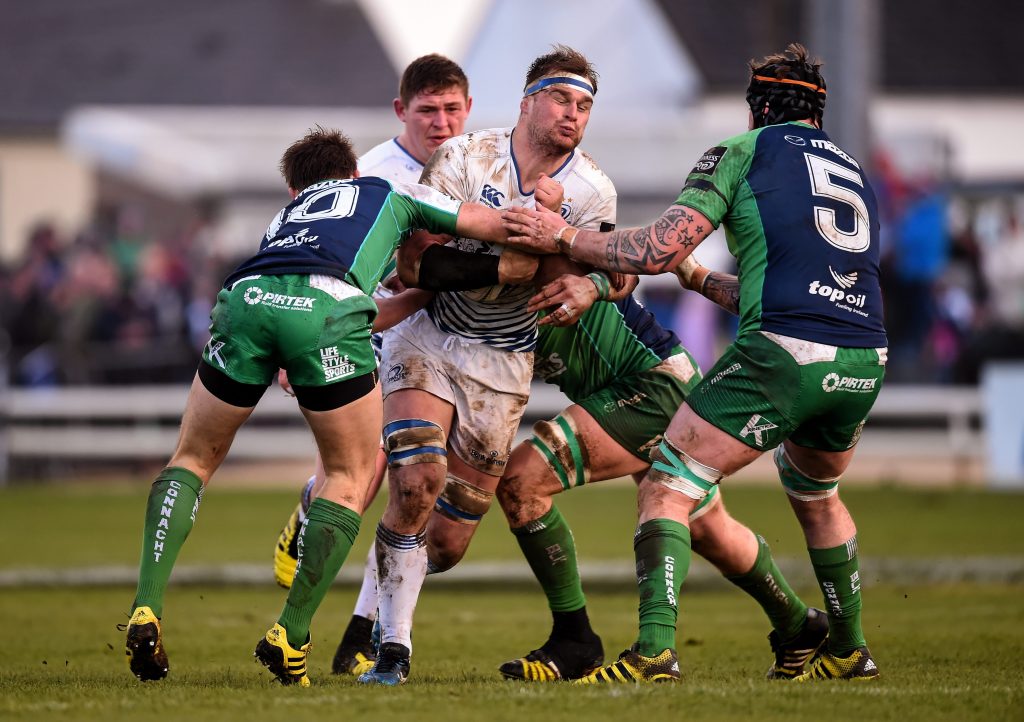 Another Marmion try, another one-point victory for Connacht. Preceding the clash in March 2016, the two teams met in the early stages of the 2014/15 season with a similar outcome.

This time, it was Leinster who competed with the wind at their backs in the opening half and, courtesy of three Madigan penalties led 9-3 at the break.

The second half went scoreless aside from Marmion’s try that Jack Carty converted. Again, the visitors laid siege to the Connacht line but unforced errors proved costly and they saw a six-match winning run in interprovincial derbies come to an end. 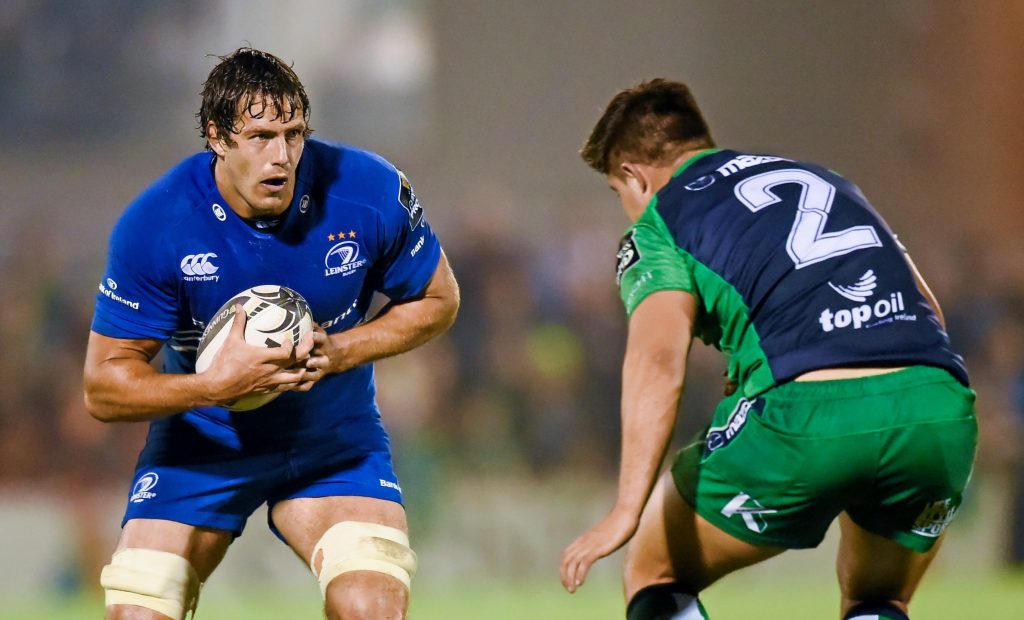