Coolmine are 30 years and growing… 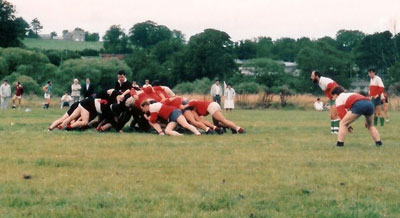 First affiliated to the Leinster Branch – Irish Rugby Football Union in 1980 they entered the Junior Leagues in 1981, playing their home games on a pitch which was leased on an annual basis from the County Council. The Mini Rugby and Youths section was founded during the 1981/82 season and has prospered ever since in this spiralling suburb of Dublin City.

In 1985, after a number of successful years on the playing fields, Coolmine purchased its current home, a site consisting of eight acres at Ashbrook, Castleknock, Dublin 15. A series of developments took place over the following years and the site now consists of two floodlit pitches, all weather training area, car park and a modern two storey clubhouse which was officially opened in 1993 by the then President of Ireland, Mary Robinson.

On the playing front, Coolmine has continued to prosper and the first XV currently competes in the Leinster League Division 1A, seeking to gain All Ireland League (Senior) status. The Under-21’s in the J.P. Fanagan League and the youths from the ages of 7 to 17 have their own Metropolitan League and Cup competitions. A selection of Cups and Pennants from the various sections adorn the upstairs bar area.

While concentrating much on the playing front, Coolmine has not neglected the social aspect and as well as the mandatory trips to England, Scotland and Wales, it has undertaken tours to Italy, France and the Cayman Islands and Hong Kong. Teams at all levels regularly organise tours throughout the year. Also, a link has been established between Coolmine and The Mata Wahorou Club in New Zealand, with both clubs exchanging developing players on a seasonal basis.

In 2006, Coolmine completed an ambitious clubhouse renovation project which added two new changing rooms, shower areas and toilets, as well as an entrance atrium, committee room and viewing balcony over the main pitch. Our new clubhouse is also wheelchair accessible with a lift to the first floor.

Why not come celebrate our birthday at our Annual Business Lunch which takes place in Dunboyne Castle on Friday, 5th November with guest speakers George Hook and Caleb Powell. MC for the day is renowned rugby referee John West.

For more information check out our web site www.coolminerfc.com or contact Gordon (086-2546490) and by e-mail patannw@eircom.net