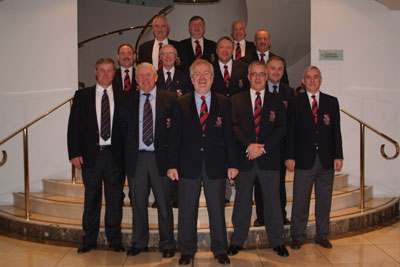 This is one of the major fundraisers the club organises every year and despite current recessionary times the event was a great success again due to the continued support of local businesses and sponsors.

The day began at 1pm with a drinks reception followed by a generous four course lunch. MC for the day was renowned rugby referee John West and guest speakers George Hook and Caleb Powell kept everyone entertained during the day.

A special moment during the afternoon was a presentation of flowers to Cathleen Prunty, mother of former club president John Prunty and grandmother of club captain Ollie Prunty, who recently celebrated her 80th birthday and has never missed a Business Lunch over the last couple of years.

The club celebrated their own birthday this year of 30 years and were fortunate to have 13 former club presidents in attendance on the day. With everyone fed and watered it was time to retire to the bar for more entertainment into the late hours.

A special thanks to this year’s organising committee Pat-Ann Wood, Peter Stears, Gordon Wood and Audrey Stears for a job well done. Here’s looking forward to next year…