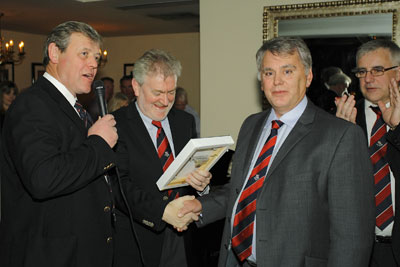 In a departure from tradition, the dinner took place outside the Clubhouse in ‘Brasserie 15’ bar and restaurant in Castleknock.

Brasserie 15 have been one of the club’s main sponsors for several years now and the night proved to be a great success with tickets selling out many weeks before the event took place.

This year’s outgoing President Pat Sheehan’s first links with the club was as a parent of his son Jack who began playing Mini rugby many years ago.

It wasn’t long before he became involved in coaching and later moved on to become Youth Co-ordinator for the club. A big thanks to everyone who supported the event and of course to all the staff for their hard work on the night.