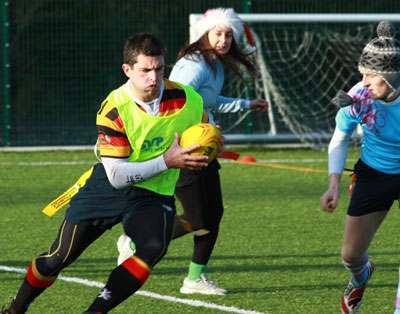 Eight teams took part in this tag blitz, in aid of the St. Vincent de Paul, which was kindly sponsored by Blanchardstown Institute of Technology (ITB). Another sizable amount was raised on the day through team contributions, funds, raffles and donations.

Over 100 players took part compromising of eight teams in total. All teams were guaranteed at least three games and those who were most successful fought it out in a tight battle in the final playoff. The cold weather didn’t detract from the fun and with the main pitches completely frozen the all-weather surface saved the day and allowed the competition to go ahead.

Very special thanks to the Institute of Technology Blanchardstown (ITB) who generously sponsored the event. Many thanks also to everybody who played and supported and a special mention must go to Claire O’Donoghue who organised the raffle on the day.

Final thanks to all team captains, to referees Ray Mooney, Helena Malone and Alan Mooney and everyone who contributed to this event.